These two have lived long enough and paid their dues to sing the blues... 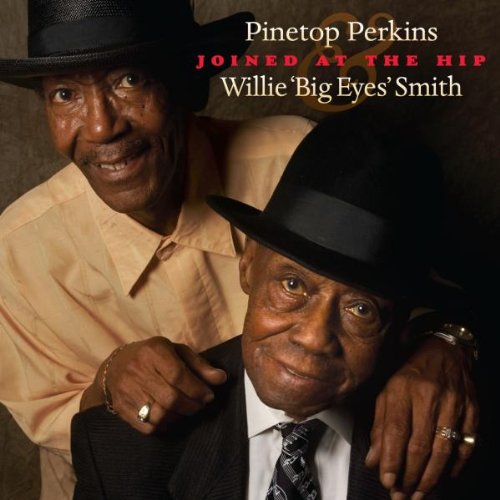 Pinetop Perkins and Willie "Big Eyes" Smith have been playing together on and off for more than four decades. Both played with Muddy Waters during his '70s resurgence and both continued on without the icon as part of the Legendary Blues Band. They've been on record and onstage more times than they can count since but Joined At The Hip represents something of a first for the two and that's saying something considering the careers and ages of both men.

Age may be nothing but a number but the numbers in this case are noteworthy. Willie "Big Eyes" Smith, is the young whippersnapper of this duo at age 74. Joe Willie "Pinetop" Perkins was 96 at the time of this recording (now 97), out on the road, touring with Smith in support of their new record. To put that in some kind of historical context, Perkins was born during the William Taft administration, meaning President Barack Obama is the 17th man to serve in the Oval Office during his life.

Now that makes for a great, great story and there is something inspiring about two men in their later years continuing to do what they love. Some fans, critics, and writers will stop right there and declare the album a success just because of how unlikely it is for there to be an album at all. Others will have their knives out for it, convinced these two long ago exhausted any new tricks these two old dogs might have learned.

It's hard not to admire two men who still want to do this and do it the right way and that spirit can be heard between the notes. That desire mixed with their collective experience, knowledge, and understanding of the music is so potent it almost becomes another instrument in the mix. Joining these two in the studio is 78-year old bassist Bob Stroger — winner of the outstanding bass player award at the Blues Music Awards — and Smith's son, Kenny, on drums. John Primer, another Muddy Waters band alum, joins on lead guitar along with Frank Krakowski.

The album opens with the strutting "Grown Up To Be A Man," a pure Chicago blues number so good it's hard to believe this is its first recording and not the hundredth. Smith's vocals are warm and inviting, the character and blusiness of them coming not from grit or strain but from experience and age. What Perkins has lost in power and agility he makes up for with experience, laying down an elegant bridge when Smith throws it over to him. Perkins works in a couple bars of "Chicken Shack" into "Cut That Out" and later on "You'd Better Slow Down." "Shack" is a song Perkins has been playing for who knows how long and one he continues to play on tour, including in Memphis last month when I saw him.

"Take Your Hands Off My Woman" borrows the musical essence of Muddy Waters' "Got My Mojo Working." While the roots of that song are plenty old and tired, Perkins turns in his most energetic piano solo and Smith fires off a pair of fine harp solos. It's hard to imagine they'd have had the same energy had they settled for simply covering the more famous "Mojo." Smith originally wrote "Walkin' Down The Highway" for Perkins to sing but wound up handling vocals himself. He and Perkins again contribute great solos and it's here for the first time the guitars of Primer and Krakowski are given a bit more prominence.

The most moving moment on the entire album might have the least bluesy origins of any song on the album. Pinetop Perkins contributes one of his two lead vocals on "Take My Hand, Precious Lord." The hymn was written by Rev. Thomas Dorsey and is adapted here by Perkins. Listening to this song reminds me of something I wrote about listening to Johnny Cash's American V, released shortly after his death. Listening to the 96-year old Perkins singing about being tired, weak, and worn and reaching for the hand of his savior should reduce everyone who hears it to tears. It had that effect on everyone present when the song was recorded, according to the wonderful liner notes by noted historian Bill Dahl.

Recording technology and commercial considerations have altered and distorted the blues, regardless of what the Wall Street Journal has to say. It's rewarding to hear Perkins and Smith playing traditional Chicago blues at a pace and volume that ignores these trends. This is a history lesson presented not by a boring lecturer or dry recitation of names and dates but rather a living history lesson presented by men who were at the center of it and know how to bring it to us. It's good to hear these two Joined At The Hip once again. Let's hope they stay that way for a good while longer.