A snapshot, not a review, of R.E.M.'s 'Accelerate' 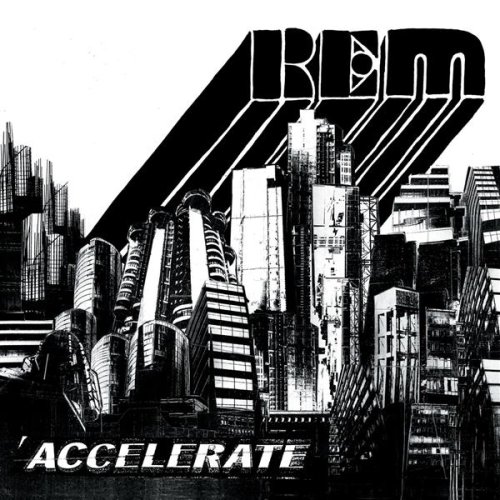 This isn't going to be a review of R.E.M.'s Accelerate; well, not exactly.

A review, to me, implies past tense. It implies a verdict has been reached and a decision will be rendered. I knew my analysis would evolve as my first impressions were nullified by subsequent listens. My feelings about this record are still fluid and will likely change again so instead of calling this a review, I'd like to call it a "snapshot."

Maybe we should back up further than my first impressions and start out with what I'd heard about the album going into it. After three records without founding drummer Bill Berry that ranged from being pleasantly uneven (Up, Reveal) to godawful (Around The Sun), word out of R.E.M.'s camp was this would be a return to the band's classic sound. Peter Buck got paid for those three records because he presumably did something on them, but no one knows what the fuck that something was. We were told prior to Accelerate's release that was about to change. Now we all know internet rumors and band interviews have historically had casual relationships with the truth but the rumors about the return of Peter Buck proved true. As for a return to the band's classic sound? Well, we'll have to talk about that.

If by "classic" you mean the band's I.R.S. records (Murmur, Document, Life's Rich Pageant, Fables of the Reconstruction, etc), I disagree that Accelerate is a return to those days in terms of sound or quality. The album from the band's past Accelerate most closely resembles is Monster and that is a bit problematic.

Monster reached #1 in the U.S. and sold over four million copies. Someone obviously liked it. I liked it... until I didn't, and I wasn't alone. I liked the album well enough but several months later I was bored with it and tried selling it to multiple used-CD stores on multiple occasions. Why multiple stores and occasions? Because the used stores had more than enough copies to satisfy the demand. In short, we all bought it and got tired of it about the same time. I wonder if Accelerate will suffer the same fate. Over time, my feelings about Monster changed again and not surprisingly it colored my feelings towards this.

Accelerate clocks in at a scant 34 minutes spread over 11 songs. It's fast-paced, beginning and ending before you realize. The songs with hooks have enough life and energy to be remembered when the record is over; mercifully, those without them are over quick.

The title track might be the best thing on this record. The propulsive sounds of paranoia are delivered tight like a fist. "Living Well is the Best Revenge" is the first cousin of "Life and How to Live It" by title, the first cousin of "Begin the Begin" as far as riffs go. What Stipe's vocal lacks in variation is more than made up for in passion; he spits the lyrics at hypersonic speed with a visceral intensity. "Mr. Richards" lacks a killer chorus but has a great bounce. "Hollow Man" is the emotional center of the record and not only rates among the best R.E.M. songs of the decade but almost reaches the glorious highs of the band at their best. "Sing For The Submarine" is the jangle moment on the record, coming closest to recapturing the '80s I.R.S. sound. It makes allusions to "electron blue" and "feeling gravity's pull," two fun little inside jokes for dedicated fans, perhaps.

Speaking of the lyrics, we have this breaking news story. This just in: Michael Stipe doesn't like the Bush Administration or the Republican Party. Hey, Michael, we got the memo. I heard "Bad Day" on the In Time compilation. I suffered through all of Around The Sun, so I heard "I Wanted to Be Wrong" and "Final Straw." I got the point. Can't we just… Move On?

It's not just the politics that plague the lyrics, it's Stipe's frustrating tendency to overwrite. Early in the band's career, his mumbling was indecipherable, his lyrics impenetrable. He grew as a writer and a vocalist and with that growth came some fantastic, classic songs. Unfortunately that growth has also been a magnifying glass for Stipe's hubris, yielding some embarrassing results. He's at his best when he doesn't spell it all out, and that isn't often enough on Accelerate.

That lack of subtlety often found in the lyrics also plagues the music. There are a couple slower moments on the record and they're well placed. Without them, listeners would zone out in much the same way they did on the last three records. That's the irony here; Accelerate is damn near as monotone as the last three records, just in a different way. There is a lot of static on this record, sonically and compositionally. Some of that comes from the band self-consciously refusing to over think things – think of all those famous action sequences where one character tells another not to look down – and some of it has to be laid at the feet of producer Jacknife Lee. Lee assisted U2 on How To Dismantle an Atomic Bomb and that is an important connection because I swear there are moments I wanted to shout, "UNOS, DOS, TRES, CATORCE!"

My feelings about this record are still a blurry picture, but the haze is lifting with each listen. Accelerate won't be the first album I reach for when I'm in the mood for R.E.M., but I won't be deleting it from my iPod. It isn't a major achievement but it more than reverses the downward trend of the past three albums and paints the way to a brighter future.