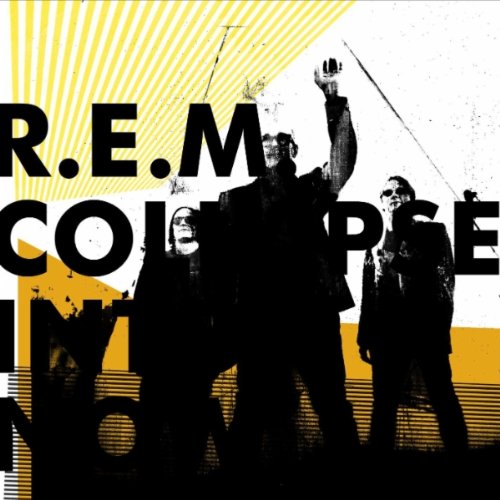 R.E.M.'s latest album Collapse Into Now is a sonic buffet of the band's best work. Like many veteran bands blessed with longevity, R.E.M. spent time in the wilderness following the retirement of founding drummer Bill Berry. They began their comeback with the loud, aggressive Accelerate, abandoning the soporific sonic experimentation that characterized so much of their post-Berry output. They take a step forward on Collapse Into Now by taking another step back, adding more of the sounds that defined them at their peak.

The trio of "Discoverer," "All The Best," and "Überlin" open the record in strong fashion. "Discoverer" resembles "Living Well Is The Best Revenge" from Accelerate but without the venom. "All The Best" throws down the gauntlet to the younger generation and perhaps towards the younger generation of bands.  It's like Bono with a bad attitude. "Überlin" gives us a sonic change up as Peter Buck breaks out the acoustic for the first time. Most fans immediately recognize his jangling Rickenbacker, but Buck is masterful on acoustic and some of the band's best songs have employed it. We get a lot of Stipe and Mills singing together and that's always a good idea even if it's not on a good song. "Überlin" is a good one, though.

It's a dicey proposition talking about lyrics on an R.E.M. record because Stipe has consistently been opaque, metaphoric, and downright weird. It wasn't until the late '80s you could actually decipher what he was even saying, let alone derive some kind of meaning from it. Somewhere along the way, he became a really good singer rather than a mysterious mumbler. When he became understandable, it became just a little more important that he made some kind of sense. He often rose to the occasion, wrote some amazing songs, and delivered fantastic vocals.

I'm glad he's no longer buried in the mix, but the lyrics are a problem throughout the album particularly on the choruses, as in the songs of Collapse Into Now are have none. Nonsensical verses can be forgiven or overlooked if you bring it in the chorus but that doesn't happen often enough.

"Every Day Is Yours To Win" and "Walk It Back" are imbued with a sweetness that recalls songs from Automatic For The People. "Alligator_Aviator_Autopilot_Antimatter" is a big raveup with vintage Stipe free association I'd like a lot more if he'd refrained from repeating the word "hater," one of the more appalling pieces of the 21st century lexicon and war crimes against expression and the English language.

The music and melody of "Mine Smell Like Honey" are very ear-friendly but this might be the worst chorus by any band in the past decade and that includes those penned by Nickelback:

What the fuck, Michael? Does this involve weed and a Beavis & Butt-Head Moron-a-thon? Are you just shitting me?  I don't ever want to hear anyone tell me theirs smell like honey. I'm horrified and feeling perhaps just a little violated. That is easily the worst offender but the problem is a recurring one.

"It Happened Today" suffers similarly and in the process wastes the occasion of Buck playing mandolin. The opening lines nearly prevented me from hearing the rest of it and I'd have been better off if they had. I don't care if you can rhyme parable and terrible, you shouldn't. Ever. It gets worse in the chorus: "it happened today, hip hip hooray." Mills should sue Stipe for making him sing that! I don't care if they're being ironic, they're 50-years old. That's not going to take the taco.

They walk this tightrope over the course of 12 songs and 40 minutes. The best moments are good but not good enough and there aren't enough of them to compensate for the misses. I want to like it and I do but I can't escape the felling that the bell is already tolling for Collapse Into Now because I won't remember these songs six months from now so this won't be the album I reach for the next time I'm in the mood for R.E.M.