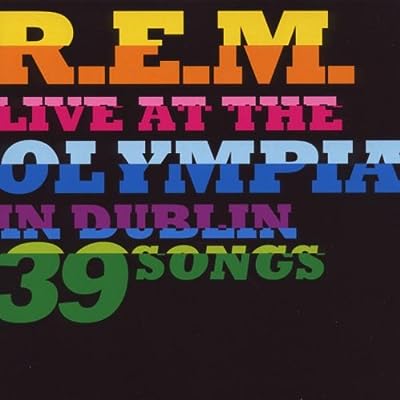 What do you say about the album that has everything?  I'm rarely at a loss for words, but I've spent the past week trying to conjure a method to heap an appropriate amount of praise on Live At The Olympia.  I'm still not quite sure where to begin, but a collection this brilliant demands more than silent admiration.  Attention must be paid.

I have many contrived rules and preferences for music and in particular live albums.  I bring this up because Live At The Olympia breaks most of them and yet I'm ready to rate it among the best live albums in my music library.  A great live album should take the listener to the front row of a show they (most likely) didn't get to attend.  I prefer complete, single shows to compilation live albums culled from multiple performances.  The latter has always felt like "cheating" to me.

Live At The Olympia is one of those live compilations but it doesn't matter because, as Michael Stipe says at the beginning of the first disc and later repeats, "this is not a show."  Live At The Olympia was recorded over a five-night stand in Dublin, the purpose which was for the band to road test new song ideas for the album that would become Accelerate.  As an olive branch for playing rough ideas of songs the audience wouldn't know, R.E.M. dug deep into their back catalog and dusted off rarities and fan favorites.

Olympia is a aural love letter to fans who have been with the band from the beginning, and even those who got in somewhere in the middle but have embraced the entire 25+ year catalog.  What's presented on this souvenir from that run are the new songs and those rarities.  Casual fans might want to sit this one out, despite how perfect this is.  You won't find live versions of "Man On The Moon," "Losing My Religion," "The One I Love," or "Stand."  These are great songs and vital to the legacy of R.E.M.  You can find many fine live performances of these songs on the numerous live DVDs the band has released over the years, and the first three were released on the live CD/DVD package the band released from their Around The Sun tour.  If you want the hits, they're out there.  Live At The Olympia looks beyond the hits and goes back to the band's earliest days, from Chronic Town forward.

I hate and yet overuse the phrase "worth the price of admission" but it's the best way to express how I feel about "Wolves, Lower."  I probably would have bought this set no matter what.  The presence of "Wolves, Lower" removed any lingering doubt for me.  That's the thing, though- they didn't just include it, they nailed it.  That's what I mean about perfect.  They sound great!  Another highlight for me is "Circus Envy."  Not everyone loves Monster.  I haven't always loved it.  "Circus Envy" got dusted off for the first time in 12 years on this Dublin stand and the band kept it alive a time or two on the Accelerate world tour.  That got me to go back and check it out again, and I had completely forgotten how great it is.  It's just as good if not better on Olympia.

I'm gushing and I still feel like I'm underselling how wonderful this is.  Run, don't walk.  Essential doesn't begin to describe it.  You have to have this.