Reviewing the presentation of Robert Johnson's discography 100 years after his birth... 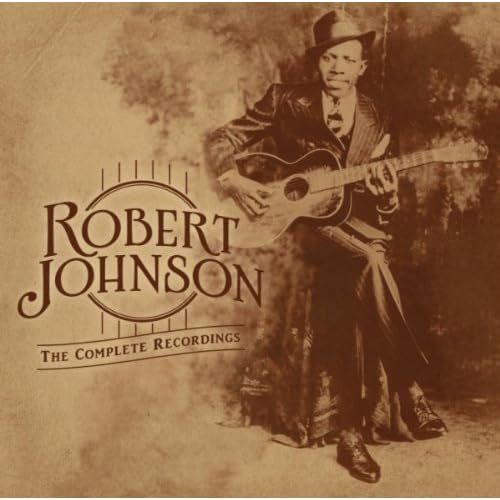 There's not much point in reviewing the work of Robert Johnson. There's plenty left to be said and learned as new generations discover these vital, timeless works but what's left to review? My purpose isn't to convince you how great Johnson was or why he (still) matters. This is aimed squarely at people who know and love this music and are trying to decide whether they should trade in their copy of King Of The Delta Blues Singers or The Complete Recordings in exchange for The Centennial Collection.

The Centennial Collection is really an updated version of The Complete Recordings and there are three things that distinguish the two releases.

The first is sound quality. Moses brought The Ten Commandments down on stone tablets, Robert Johnson recorded his legendary canon in a hotel room with a recording machine that by today's standards isn't much more sophisticated than two slabs of rock. The source recordings are seriously limited but despite that, some very smart people obsessed over the sonic details and did an incredible job transferring the music from 78 rpm acetates to CD. I can't quantify the sonic improvement other than to tell you it's noticeable. It's possible technology may improve again in future years to yield even great fidelity but this is as good as it gets for the foreseeable future.

Before going to other differences, we should take a moment to talk about something that is exactly the same between this version and those prior: the speed. There has been controversy over the past few years about whether or not Johnson's recordings were sped up, whether accidentally or on purpose. It's not a universally accepted fact but I met one bluesman this past weekend in Memphis who swears up and down we've been hearing them wrong all along. I've not heard the slower versions and until I do – and perhaps even after – I'm not going to tell anyone which version is correct. This edition presents the music at the same speed it's been presented before and I'll leave the debate to others. I hope one day it's resolved in one direction or another and we're left with one version, the proper one. Don't hold your breath.

The second difference in this collection is the liner notes, biographical information, and recording notations. Noted author and historian Ted Gioia has written an outstanding essay on Johnson and his legacy and Stephen C. LaVere has updated the biography he wrote in Complete and also provides insight into how these songs were remastered. Johnson fanatics and blues obsessives will find this information fascinating, if not indispensible. The liner notes of Complete were fine but these are better.

The Centennial Collection has one track not on The Complete Recordings, making this even more complete than complete (an alternate version of "Traveling Riverside Blues"). This additional take was made available first on the 1998 re-issue of King Of The Delta Blues Singers. In most cases, that one track wouldn't make much difference and it still won't to some, but the liner notes and biography included in Centennial tell us Johnson recorded 59 songs over the course of two sessions and these 42 songs are all that survived. Johnson has been researched and studied exhaustively and there is no reason to think he recorded any other sessions or that we'd find it at this point if he did.

A fourth difference worth mentioning but not one likely to impact a buyer's decision, and that is the sequencing. As mentioned, Johnson recorded 59 cuts and 42 of them survived. There are 29 original songs and 13 alternate takes. The alternate take was sequenced immediately following the initial take on Complete, meaning you often listened to a song twice before getting to the next one. It was annoying. Centennial changes that by presenting the San Antonio sessions, Johnson's first, on Disc 1 and the Dallas sessions on Disc 2 and the alternate versions from the respective sessions are placed at the end of the respective discs.

Taken together, there's a compelling case to plunk down the money to own Johnson's spellbinding work once again; there's more of it, it sounds better, it's better sequenced, and lovingly presented. The Centennial Collection is the definitive collection and no music lover should be without it.