Ronnie Earl is a special artist and Living In The Light is another compelling chapter in a career filled with them. 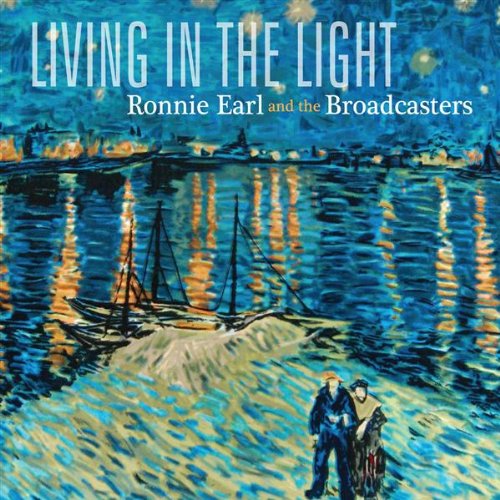 Ronnie Earl's guitar prowess and mastery of the blues idiom are not up for debate.  They are worthy of note and celebration, but there's not a whole lot of reason to devote endless paragraphs stating the obvious.  His skill is reason enough to plunk down the money for Living In The Light, but there is so much more to this record than some great scales and solos.

Living shines its brilliant light on the many dark places life has taken its creator.  The 12 songs on this album reveal a man who has been broken and put back together.  These songs of salvation revel in a spirit of gratitude and deliverance and an awareness of how precarious it can all be.  Earl's blues go beyond the idiom's standard laments of love gone wrong, no-good women, and drowning one's sorrows in self-annihalating pursuits of seedy sex, drugs, and booze.  These are the blues of a man who nearly lost his life traveling that road and knows there's nothing glamorous in that.

Living In The Light is a crusade.  This is a blues exorcism and blues evangelism.  His message is recovery, hope, faith, and love.  Even if listeners don't share his beliefs, it is impossible to listen without understanding how sincerely he believes and that those beliefs saved and transformed his life.  That Earls' message is so real to him makes it real to listeners, and that sense of intense personal struggle and reflection is at the core of what the blues is all about.

Don't misunderstand; this is not a religious record in the conventional sense.  Earl isn't selling, he's expressing.  We don't know what it was like to sharecrop in the Mississippi Delta in the early 20th century but there is something recognizable to all in the blues that flowed from that life.  In that same way, it's not important that we have been the same places Earl has or that we end up where he is now.  It's the urgency, struggle, and release of overcoming that we'll identify with.

The authenticity and musical skill of Earl are required to do a lot of heavy lifting because his lyrical skills are average.  The blues hasn't had many tales about being a descendant of a Holocaust survivor, a story that deserves better than rhyming "blues" with "6 million Jews."  Still, there's something poignant about the song despite the lacking deftness in the words.

He recruited longtime friend Kim Wilson (Fabulous Thunderbirds) to sing on three of the album's vocal tracks, with Dave Keller taking the other two, including an uplifting cover of Bob Dylan's "What Can I Do For You?" (from Saved).

Those not into "message" blues need not worry.  There's more to this album than its message, although Living In The Light sets itself apart from many blues recordings by having one.  There are several instrumental tracks that allow Earl to stretch out and play, showering listeners with his incredible skill as a guitarist.  Even the tracks with lyrics give him ample time to play, and there can really be no such thing as too much Ronnie Earl guitar.  "S.O.S.," clocking in at over nine minutes, is passionate, soulful work serving up the hard-boiled blues.  "River Charles Blues" is an easy shuffle with gliding guitar.  "Recovery Blues" is slow and meditative, with wonderful organ work from Dave Limina and Earl powerfully punctuating each line.  "Pastorale" is simple, delicate, and one of the loveliest compositions he has ever committed to tape.

Ronnie Earl is a special artist and Living In The Light is another compelling chapter in a career filled with them.