Review: Rory Block - Shake 'Em On Down - A Tribute To Mississippi Fred McDowell 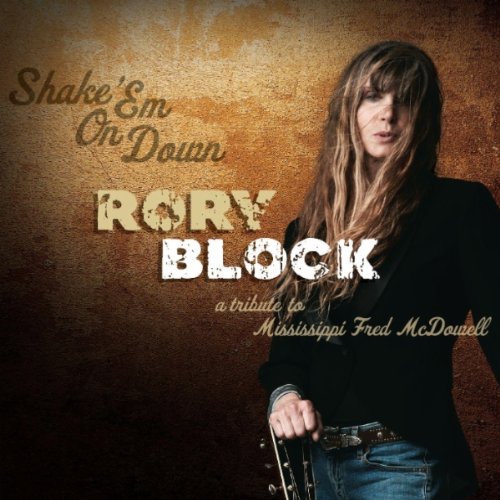 Rory Block is fortunate soul who figured out who and what she wanted to be at an early age and had the courage to pursue it. I'm not suggesting her life has been easy. Hell, is anyone's life actually easy? She paid a price and paid her dues but her hunger for music and the blues put her on a path and that journey and those she met along the way has informed her music.

Her abilities and understanding were aided in part because the blues is influenced by the folk tradition of passing songs and knowledge from generation to the next, and Block was inspired in time to meet and learn from some Delta pioneers and their protégés. That opportunity to learn not just from the recordings but from the people who made them has inspired a new chapter in her career, "The Mentors Series." She began recording tribute albums to those early Delta masters, emphasizing those she was fortunate to meet. Shake 'Em On Down is the latest chapter in that series, paying tribute to the great Mississippi Fred McDowell. The majority of these songs were penned, recorded, or performed by McDowell. Block also wrote a few originals for the set.

It's preposterous that a white female from New York would be among the most capable, faithful practitioners of an idiom invented primarily by African-American men who were slaves, former slaves, sharecroppers, and hobos concentrated in the Mississippi Delta, but the blues is a culture that transcends culture, race, gender, and geography. Block continues to be among the preeminent practitioners of acoustic, country blues. That it shouldn't work, that absurdity is part of what makes this album great. I love when gender roles and cultural identity get thrown out the window by daring artists with the skill and vision to make it work. Block is such an artist and it works very well on Shake 'Em On Down.

A masculine blues prowl like "Kokomo Blues" is a perfect vehicle for someone who wants to confound preconceived notions. Block doesn't shy away from the song's overt lust. She tempers the testosterone just a little but doesn't make it pretty or polite. She is unapologetic while maintaining a hint of a woman's touch. That same formula is at the root of the title track and it works equally well. The relentless slide and charging riff are given just a little sweetening in the form of overdubbed harmonies but none of the meaning is lost. "Worried Mind" is simple, pure country blues with lyrics that have been nicked and slightly altered in countless blues songs.

Performing "Kokomo Blues" and "Shake 'Em On Down" is only part of the story presented on this album. They're great songs that have been covered, copied, and re-interpreted innumerable ways by artists inspired by the influential McDowell.

Some may find it odd or inappropriate to mix original songs on an album purporting to pay tribute to another artist but Block's originals showcase her own deep understanding of McDowell and provide context and history that assists listeners in connecting with the album's subject and themes.

"Mississippi Man" tells the rest of the story behind this record. McDowell isn't just a voice and guitar on a vinyl disc or a picture in a photo album to Block. He is a flesh and blood, three dimensional, and present at a crucial moment in her life. "Mississippi Man" is a powerful musical account of her first encounter with McDowell. She sketches a former version of herself from a lifetime ago and puts her back in contact with the moment she met McDowell. She brings them together again, immortalizing that moment in the intimacy of a song.

"The Breadline" is a more academic connection to McDowell but no less powerful. It's natural to hear Block connect to McDowell musically, being an incredibly gifted slide player with a deep understanding of the deep blues. We experience that connection throughout the record. What "The Breadline" does is connect listeners to McDowell by writing the right song for the right moment because McDowell's blues are our blues once more. The global economy is a tangled, corrupt, impossibly complex system. When the economy is flushed down the toilet and the politicians squabble about what they're going to do to fix it -- and feel free to use any of several possible definitions of the word fix -- the global economy is no longer arcane formulas creating obscure indexes, it's survival and it's personal. So is Shake 'Em On Down.