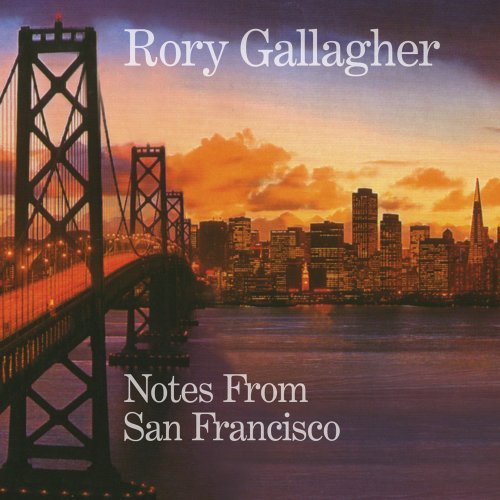 Rory Gallagher (1948 - 1995) was as proudly Irish as a man could be, but he certainly had an affinity for San Francisco. After winding up his 1978 tour in Japan, Gallagher and the band flew directly to the city by the Bay to record the album that would eventually be called Notes From San Francisco. Although the 12 songs the group recorded were outstanding, Rory became so frustrated with the mixing process that he shelved the project indefinitely.

In fact during this stay, Gallagher had something of an epiphany. He attended the Sex Pistols’ final show at Winterland, and it had a powerful impact. Back in 1966, Rory had formed one of rock’s first power trios, Taste. It was a format he was very comfortable with, just bass, drum and guitar. But along the way he was convinced to add keyboards and even horns and electric violin to his music. It was a decision he came to regret, and after seeing the Pistols, Rory decided to strip the group back down to a trio.

It seems that the biggest frustration for him was all of the effort it took to properly mix these additional instruments into his basic sound. He wanted to get back to what he called “meat ‘n’ potato rock ‘n’ roll”. So he gave up on Notes From San Francisco, and broke up his band of the past five years.

The studio tapes had lain dormant until one day in 1992, when Rory mentioned to his brother Donal that he would like to see them released eventually - but only if they were properly remixed. Jump ahead to 2011, when Donal allowed his son Daniel (Rory’s nephew) to take a stab at the project.

He did a mighty fine job, as a listen to Notes From San Francisco will confirm. It is unfortunate that the situation had left such a bad taste in Gallagher’s mouth, because there are some great songs contained on this record. Leading off with the boogie-woogie inspired “Rue The Day,” Rory and keyboardist Lou Martin go at it furiously. Then in typical Gallagher style, he settles into the slow blues of “Persuasion, before letting it rip during his solo.

With “Mississippi Sheiks” Rory does pare the band back a bit, and his lengthy, out of this world solo makes the tune an early highlight of the record. You could call “Wheels Within Wheels” the first Rory Gallaher power ballad I suppose, although you would probably lose a tooth if you said something like that around his fans.

“Cruise On Out” has a sound from his early days, the classic Bo Diddley beat, which eventually gives way to more searing guitar solo work. The final track of the original nine is “Fuel To The Fire.” One can see why Rory programmed the record for this to end it. He is a master of the slowly building blues song, which works up to another tremendous guitar solo. Rounding out the CD is an alternate version of “Wheels Within Wheels,” and two bonus tracks, “Cut A Dash,” and “Out On The Tiles.” The last two are pretty raw, and almost sound solo.

The 1979 tour brought Rory back to San Francisco - where the trio scorched the walls of The Old Waldorf. Rory Gallagher was never afraid to introduce new music to his fans, as is evident here. He leads off with “Follow Me,“ from the just-released Top Priority. Six of the 12 tracks are from Photo Finish, which is the album the trio recorded after Notes From San Francisco was scrapped.

The band also rip through a number of fan favorites, including “Tattoo‘d Lady,” and “Bullfrog Blues.” The influence of the Sex Pistols, and loud fast raw punk rock in general seems to have made a lasting impression as well. The final song of the night is the old Frankie Ford classic “Sea Cruise.” Oo-wee, oo-wee baby - this one is played at hyper speed, and I don’t know if I would have even recognized it without seeing the title.

Rory Gallagher was definitely one of the all time great guitar players. Notes From San Francisco may have been delayed an awfully long time, but it is a beauty. This is definitely not one of those odds and ends albums put together by the record company. In fact, I think Notes From San Francisco would have been a substantial hit for Rory if he had seen it through. It is certainly one his fans will appreciate, and slots in perfectly between Calling Card and Photo Finish.