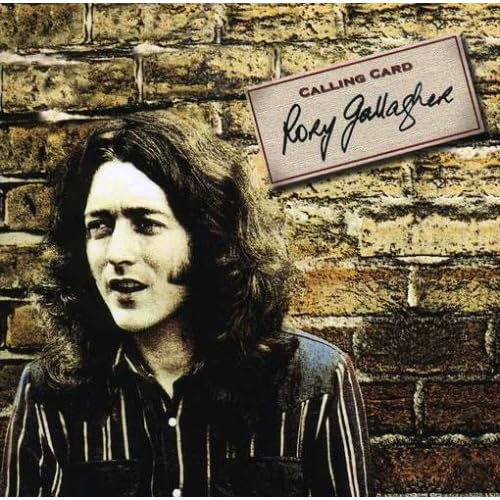 Rory Gallagher was one busy Irishman in the early seventies. Between 1971-1973 he had already issued four LPs. Rory Gallagher, Deuce, and Blueprint were studio efforts, and there was also the self-explanatory Live In Europe. These four were recently re-mastered and re-released by Eagle Rock, with bonus tracks added. The hard-working musician also recorded Tattoo in 1973, which kicks off Eagle’s latest reissue series.

In addition to his live work, Tattoo has taken its place as a favorite of Rory’s fans. The record features his anthemic concert staples, “Tattoo’d Lady” and “Cradle Rock." There is also the great acoustic guitar-led, harmonica-driven “20-20 Vision,” and the muddy, electric blues of “Who’s That Comin,” and “A Million Miles Away.” The two bonus cuts appended here are both hot covers. “Tuscon, Arizona was written by the legendary Link Wray, while “Just A Little Bit” is a Magic Sam tune that has become a blues standard.

Rory spent most of 1974 on the road, particularly in his Irish homeland. His Irish Tour ‘74 is a great document of these shows, as he and his band were simply on fire. Watching the Eagle Vision DVD documentary of the show, one cannot escape the knowledge of the constant danger both the band and the audience were facing. This was the period of intense IRA bombings, and retaliations. It is obvious that these appearances presented a tempting target, but thankfully nobody got hurt. It may very well be that the inherent danger in mounting these concerts added to the overall effect, because Irish Tour ‘74 is some of the most powerful live material Rory Gallagher ever recorded.

After all of this excitement, Gallagher and his band signed to Chrysalis Records in 1975. Their first album for the label was titled Against The Grain. After such an incredible flurry of activity, Rory seemed to step back just a bit on this one. Of the original ten songs on the record, three were covers. It is no surprise that Leadbelly was one of his choices, with “Out On The Western Plain.” Listening to an Irishman sing this ode to the American West is interesting, but Gallagher has so much soul it works perfectly.

The old Sam And Dave tune, “I Take What I Want” shows a different side of Rory‘s soul appreciation, that of his deep and abiding love of R & B. The semi-obscure Mississippi bluesman Bo Carter was another Gallagher favorite, and his “All Around Man” receives a strong treatment here as well. As for originals, two that stand out for me are the aptly titled “Souped-Up Ford,” and the acoustic “Cross Me Off Your List.” The reissue adds “Cluney Blues,” and “My Baby, Sure” both of which are serviceable, if none too exciting slow blues.

Although Against The Grain is not considered one of Gallagher’s definitive albums, it did all right thanks to Chrysalis’ support. His second effort for the label came the following year, in 1976. Calling Card is often cited as his finest studio recording of all. Oddly enough, this would be his final LP with the group he had come so far with. Drummer Rod de’Ath, and keyboardist Lou Martin would depart after Calling Card, leaving only stalwart bassist Gerry McAvoy with Gallagher.

But what the four of these musicians produced in their last outing together cannot be denied. Right from the top, Rory seems to be announcing that this, more than any other record - is his. “Do You Read Me” has the trademark blues feel of classic Gallagher, but here we find subtle hints of synths bubbling up. The influence of producer Roger Glover (of Deep Purple) obviously had an effect - the good news is that these two made a wonderful pair.

The hard rockers “Moonchild,” “Country Mile,” and “Secret Agent” all retain that special Irish-blues fare. As usual though it is the semi-acoustic numbers that really seem to show off the man’s enormous talent. Two lesser-known, but stellar tracks here are “Barley & Grape Rag,” and the beautiful “Edged In Blue.” There are two bonus tracks added to the reissue: “Rue The Day,” and “Public Enemy.”

Calling Card is my favorite Rory Gallagher album, but that is not to dismiss any of his other efforts. Still, for the novice - this is a great place to start. Prolific bastard that the man was, look out. I hear that Eagle has yet another batch of the great Irish bluesman’s seventies work ready for release shortly.