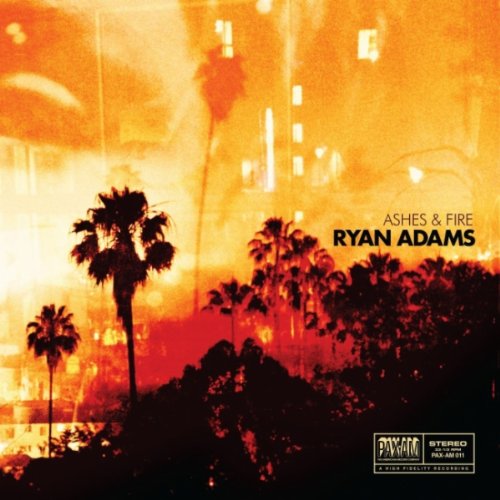 Ashes and Fire is the long-awaited newalbum from the famously prolific Ryan Adams.

The record taken as a whole is a mixture of the alt/country crooning Adams fans have come to expect from the former Whiskeytown frontman and piano laden tracks that practically ooze of grown-up themes. Ashes and Fire shows a maturity that far surpasses Adam's previous body of work, a maturity that was long in coming and hard fought for personally and professionally.

After leaving the music business for a while in 2009 (he called it a retirement but none of us took it all that seriously) Adams has snuck back into our lives and it's as if suddenly he never left. His voice, a distinct little cry that has serenaded the better part of my last 12 years, is a welcomed and comforting old friend. Only instead of singing about Sylvia Plath or Cannonball Days, he's now tackling topics like love, luck, and fidelity.

Having beaten an admitted substance abuse problem in 2006, endured on again/off again relationships with former bands the Cardinals and Whiskeytown, and even stomached a self professed disillusionment with the music business, Adams seems to be somewhat demon free these days. And it's this clear-headedness that brings Ashes and Fire to life - allowing Ryan to deliver songs about things all of us can relate to. Sure, it's not the explosive absurdity of "Do Miss America," but many Adams fans (this girl included) have grown up with him somewhere along the way.

We hear this reflection on his current state vs. his younger years in "Lucky Now:

I don't remember were we wild and young

All that faded into memory

Are we really who we used to be

Am I really who I was.

Now happily married, Ryan's domestic happiness shines through. In "I Love You But I Don't Know What to Say" we hear Adams recount his darker days:

I tried to find the balance, but got caught up in the cost

I let it go, when I met you

The clouds inside me parted and all that light came shining through.

But lest you think we've lost our Firecracker all together, it's worth noting tracks like the title track "Ashes and Fire" which could easily exist on nearly any prior Adams record - standard issue charging acoustic guitar and country twang. Classic Adams elements that remind us why we fell in love with his music in the first place.

Ashes and Fire meets Adams fans where they've been anxiously waiting and with a sweet sophistication that simply doesn't disappoint.