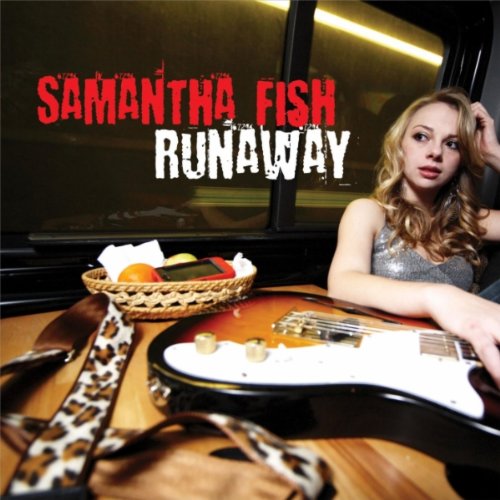 Runaway is Samantha Fish's solo debut but the second album this year to feature her voice and guitars. I wasn't crazy about Girls With Guitars, featuring Fish, Cassie Taylor, and Dani Wilde; approaching Runaway with an open mind took some convincing. I didn't know if Runaway was going to be good but it took about 15 seconds to tell it was at least going to be different and that was a good start.

Mike Zito serves as album producer and I don't know if it's his presence or the absence of the gimmick that forced Wilde, Taylor, and Fish to make room for one another that torpedoed that record but Runaway is light years better. Speaking of Taylor, she plays bass on the record but there's no question Fish and Zito are calling the shots.

The stomping, grinding "Down In The Swamp" has grit and swagger. She's only 22 and a relative newcomer but she digs for a low, snarling riff and tops it with some piercing notes. What really sells the tune is the vocal where Fish doesn't try on a faux accent so much as she slips into character. She sets the bar high – almost too high – within the first four minutes of her debut album. It's not fair to say the rest of the album is downhill from here as there are other fine moments but there's no denying "Down In The Swamp" is a highlight.

I tried making myself wait to get to her cover of Tom Petty's "Louisiana Rain" but impatience overtook me. I'm a huge Petty fan and Damn The Torpedoes is arguably his finest record. Despite that, "Louisiana Rain" isn't the obvious choice to most when it comes time to mining Petty's deep catalog for a cover. I was curious and pleasantly surprised. Petty was probably about 22 when he first recorded this and maybe that works in Fish's favor.  She doesn't stray far from the original but she's a good fit for the song despite being a much different vocalist.

The title track is the longest on the set and has a marching beat and chugging rhythm, something that sounds like it could have come out of the Aersomith playbook if Joe Perry were left in charge for a day. Zito does a duet with Fish on "Push Comes To Shove" and it may just be me but I can't get Great White's version of "Once Bitten, Twice Shy" out of my head when I hear it. The riff is solid as is the guitar playing, the lyrics leave a little something to be desired.

She makes a peculiar choice making "Feelin' Alright" the album's closer. It's a sedate, gentle, jazz-tinged number with strong echoes of the great T-Bone Walker. Fish's vocal is soft and sweet, the guitar chords drenched are with atmosphere and the lead line is sweet and melodic. It's a good performance. I don't know where it would have fit better and that may be why it was chosen for the end but it feels weird there as well.

The contemporary blues field is an overcrowded one Runaway puts itself firmly in the better than average camp, which is more remarkable because this is Fish's debut and she is still so young. She has a strong voice and plenty of guitar chops and is definitely one to keep an eye on.