A rare album that can be sparse and layered, rewarding listeners with each repeated listen. 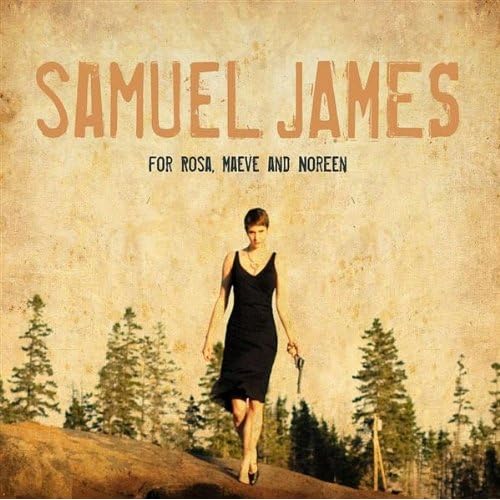 Among the landmark musical phenomena for folks of my generation was MTV's Unplugged. It seemed as though, overnight, acoustic music was cool. It was seen as a strength and indication of talent to drop studio trickery and bombastic theatrics. Millions of people were looking for songs that had more than a hook, but a kind of substance that could only be discerned in a rustic, spare arrangement.

That lasted for about five minutes. Before Unplugged died altogether, it was bastardized by bands that cheated. My mom played an Epiphone acoustic guitar when I was a kid. I know what an acoustic guitar looks and sounds like and it was evident some of these bands were taking a loose interpretation of what "unplugged" meant.

Samuel James would have never pulled a stunt like that. I'm not entirely sure they didn't power the recording equipment used to capture the songs on For Rosa, Maeve and Noreen by having an old maid operating a butter churn. I don't know how exacting the rules are to be considered for Best Acoustic Album by the Blues Foundation, but this is going to pass even the strictest scrutiny. Percussion comes from James' foot or handclaps. He plays all the instruments on the record: Resonator, Flamenco and 12-string guitar, five and six-string banjo, harmonica, and piano.

Okay, so he qualifies sonically. What about the music?

James has a contemporary approach to such an old fashioned tradition. Lyrically, he is a consummate storyteller who writes evocative prose appropriate for the coffeehouse crowd. Musically, you have the collection of acoustic instruments and essential elements of Delta blues and roots music. It's an intriguing mix of deep blues sounds but without the tortured wailing and shouting often heard on recordings of that kind.

Willie Dixon was known as The Poet of The Blues. There's little, if any, hint of the Chicago sound of which Dixon was so influential but there is poetry in "Cryin' Blind." The music cascades mournfully as lyrical, evocative slide blends with a finger-picked, low-key rhythmic backing built on some great minor notes and chords. The music isn't dependent on melody or hook, but the notes have a magnetic effect. James' delivery is expressive without excess and the story is composed in verse that stands alone. Where many of James' stories are linear, "Cryin' Blind" feels more like a sketch. Within that sketch, though, are some bold strokes of lyrical deftness.

I get a morbid chuckle out of that last line alone as well as this next passage:

"Well, give me one reason why I should give you the cause
and I'll tell you right now without the slightest pause
I've been drawing all day and they're all short straws"

In the '60s, white college students were listening to the first pressings of rock 'n' roll as well as folk music. Many folk listeners had also become aware of the host of African-American musicians who had been recording for decades but never getting popular airplay. Blues labels like Chess saw this as an opportunity to reach that audience and started marketing “folk blues” records. Some of those albums actually featured the acoustic-style blues these audiences would have favored (Muddy Waters' classic Folk Singer) and some were just marketing tricks. James' “John Ross Said” is exactly the kind of song and performance these labels were looking for with its Dylanesque social and historical awareness and incisive lyrics.

James' For Rosa has that rustic sound and the songs feel ancient enough with folk and minstrel influences that would have made them ideal for the traveling medicine shows so many of the early generations of Delta bluesmen played. His music shares many characteristics of what much of that early music sounded like, yet his lack of emphasis on the instrumental play will confound some blues listeners. He doesn't express himself loudly through his instruments. There are no fiery slide solos to be heard. The music is complete without them but when James demonstrates his nimble, dexterous ability on the instrumental “Trouble on Congress Street Rag,” it might make listeners wonder why he doesn't indulge just a little more a little more often.

This music is a distinct blend of engaging elements that are in otherwise short supply in modern music. Blues listeners with an appreciation for history, folk music fans, and fans of contemporary singer/songwriter music will all find something rare, rich, and wonderful. For Rosa, Maeve and Noreen is the rare album that can be sparse and layered, rewarding listeners with each repeated listen.