It's touted as the "Long Awaited Follow-up To The Heroin Diaries," so how does it hold up? 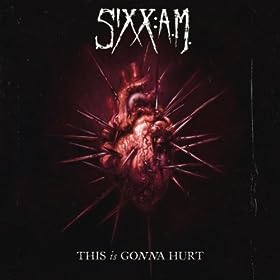 There is no doubt that founding member of Motley Crue, Nikki Sixx, is enjoying life these days. It seems like he has a new project going every day. From Brides of Destruction, to his relationship with Kat Von D, to his long-time band Motley Crue, there is always something going on with Nikki Sixx. Everywhere you turn you seem to be able to find him. In 2008, Nikki published his so-called diary from his years as a heroin addict called The Heroin Diaries and companioned it with a music CD from his newest project Sixx A.M. The CD and book went on to sell very well and people often wondered if there would be another CD from this side band of Sixx's. Well, the answer is finally in and not only is there a new CD, This Is Gonna Hurt, but there is also another companion book to go with it. Since the first CD was pretty darn good, I figured I would give this second CD a shot as well and plopped down my $10 to the good folks at Target. I immediately noticed the tag line read that this was the "long awaited follow-up to The Heroin Diaries, and my first thought was to question the thought of a year and change being considered a long wait. My second thought was to wonder if it would live up to the previous effort from the band. So, with that in mind, let's take a look at This Is Gonna Hurt from Sixx A.M.

I first popped the CD on in my car and immediately wondered what was going on because I couldn't hear anything coming out of the speakers. This is an issue to me as I do a lot of listening in my car. The first sounds I heard didn't come for almost thirty seconds when the song actually started. That upset me, but thankfully the opening song "This Is Gonna Hurt" was a rocker or I would have turned on the album from the start. The song was so much fun I forgot all about the long wait to get to the song and just started rocking out in my car. The lyrics are masterful with a solid chorus line of "Listen up, listen up there's a devil in the church. Got a bullet in the chamber and this is gonna hurt." All around a solid opening track to get you prepped for what was coming.

"Lies of the Beautiful People" is up next and is another solid rocker accented by a solid bass line and a solid vocal performance from James Michael. The song is a nice mix of pop and metal that sounds pretty pleasing on the ears and could be a song that is enjoyed by those who may not exactly find heavy metal music to be their thing.

"Are You With Me Now" slows things down in tempo, but doesn't take away from the hard hitting that the album has delivered so far. It's a much more poppy song in the vein of Theory of a Deadman and even Lifehouse. At this point in listening to the CD I am already sold that this album not only lives up to The Heroin Diaries in terms of solid music, but kicks its ass.

"Live Forever" continues the sound that "Are You With Me Now" established with a nice beat, solid guitars and great vocals. This song is a bit heavier, but has that same feel thanks to another great performance from James Michael.

"Sure Feels Right" is easily my favorite track on the album. Its a nice soft jam that makes you just want to sway back and forth while listening to it. I immediately picked this song out as a song I MUST learn how to play because it just sounds so rocking and fun. I love the lead guitar on this one too as DJ Ashba gives us a nice smooth solo and great bluesy riffs throughout the tune. I get a nice bluesy influence on this song and love every minute of it.

"Deadlihood" takes us back to the heavy, hard-hitting songs that opened the album. The song seems to show Nikki's true emotions when he realizes that a relationship has run it's course. The pent up anger he has telling the lucky lady that when it is over he will have wished they never met. It feels like Sixx is telling his lover that it was fun, but now it just sucks to be with you. Another great song.

"Smile" slows things down again, and to me it probably should have been placed before "Deadlihood" for a couple of reasons. First you have a nice smooth jam before it in "Sure Feels Right" that would have flowed very well with "Smile" following it. Second, you go from the smooth jam to a heavy hard hitter in "Deadlihood" back to a slower song and that seems like you just put the listener on a rollercoaster that slowly climbs up, then drops without sending you around the track. It's just done with one trip up and then plummeting back down. And lastly, you go from a song about being content in a relationship, to a song about breaking a relationship off, back to a song about how happy you are in a relationship. The order seems odd. That said, the song itself is pretty solid.

"Help Is On The Way" caught me completely offguard. The song opens with do-do-dos! I never imagine that I would hear a Nikki Sixx song with do-dos in it. The best part of this song is that the verses have a Killers sound to them. Michael captures the sound perfectly. The musical side is like a journey into the Cars, the Beatles and the Killers all at once. Just a solid performance in all here.

"Oh My God" is a song with a message. It deals with the floods, the earthquakes, the homeless, the drug addicts, and many more things. It is a beautifully written song with a solid hook and chorus. This one is definitely a highlight of the album.

"Goodbye My Dear Friends" kicks off with a simple piano melody and then jumps into a pounding punk rock guitar riff. The song is full of chunky guitars and searing vocals that really shine.

"Skin" closes out the album with a nice slow vibe that sends the message that we need to stop judging people on appearance and get to know who they are on the inside before passing that judgement on them. Its a great song and a nice way to close an all-around rocking album from Sixx AM.

I loved The Heroin Diaries when I first heard it back in 2008. I never imagined that it could be topped since Nikki was busy with Kat, and touring with Crue, but I can honestly say This Is Gonna Hurt is not only a solid follow-up, but the new standard for this band. I haven't enjoyed an album from beginning to end like this in a long, long time. I looked at my iTunes after listening to this album again and found that I had rated every song on the album at least a four out of five stars. That says a lot if you ask me. It should come as no real surprise that I am going to tell you to spin this album and spin it often.