Walking the line between rockin' the blues and blues-rock, Texas style... 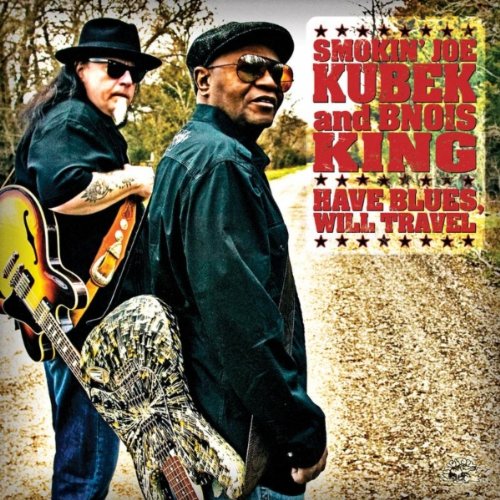 It's unusual to see a blues duo pair up when they both play the same instrument.  King and Kubek not only both play guitar but both play lead guitar and do it well enough to stand on their own.  The willingness of both to surrender a bit of the spotlight to make music together is inspiring on its face but becomes all the more because of the music that results from such unselfishness.  King handles all lead vocals and Kubek takes a majority of the solos but both get a chance to display their guitar abilities and the mixing and mastering of the record makes it easy to get a glimpse into their contrasting styles.

If you hear slide guitar, it's Kubek.  Your right speaker (or earphone) is Bnois King and the left (and center) channel is Kubek.  The Allman Brothers Band did this with Derek Trucks and Warren Haynes on their last studio album and try to do the same thing on the official bootlegs they issue after their shows.

The album opens with the title track, a pure slice of Texas roadhouse raveup blues- think ZZ Top without the rock edge and a little more swing in the rhythm.  There's a tension in the music and you can feel how easy it would have been to turn this into a blues-influenced rocker rather than a swinging blues but Kubek and King know how to push it right to the brink.  The lyrics will feel familiar to blues fans but Kubek and King have modernized the ritual of going when the going gets tough.  Another example of restraint is that both men get a guitar solo that feels fully realized yet the song barely exceeds four minutes.

Most of the album moves at a moderate to quick tempo propelled by variants of Texas-styled boogie rhythms.  There are slower moments and this hard-grooving duo is versatile enough to make these songs work as well.  Bnois King delivers a sweet, easy vocal on "Wishful Thinking," a tale of unrequited love.  The undisputed star of this song is the evocative slide guitar of Kubek.  He doesn't smoke so much as he makes his guitar weep.  He doesn't beat you over the head with excessive noodling and that efficiency adds to the power of what and when he plays.

King gets a bit more spotlight on the album's other slower moment, "Shadows In The Dark."  Like "Wishful," this is a tale of troubled romance.  Rather than unrequited love, though, we this time have a man falling in love with a married woman.  King's vocal style rarely changes but he and Kubek are good at writing songs make his voice work for them.  A title like "Shadows In The Dark" is imbued with mystery and King's sweet upper register vocal captures some of the mystery the title implies.  King doesn't do overwrought in the vocal department so he asks his guitar to communicate the full weight of his torment and it delivers.

If there is a weakness to Have Blues, Will Travel it is in the lyrics but they at least struggle in a different manner than some of their contemporaries.  Many modern blues lyricists struggle to say anything original, rehashing the same stories that have been told within the idiom for decades.  The artists that get away with this do so because the blues is about communicating feel and feeling- use words if necessary.   King and Kubek don't rehash the same stories about how my baby done me bad using the native language and iconography of the idiom.  Their downfall is they sometimes get a little too cute by half.  "My Space Or Yours?" is filled with the language of the internet and it gets a little thick ("I wanna show you my hard drive/my power supply is strong").  "RU4 Real" is made passable by the torrid guitar runs of Kubek and King.  Some of the lyrical passages are almost the right amount of clever while others are cause for cringe.  Fortunately these bouts of novelty are few.

This is a shining example of modern Texas electric blues at its best.  The bulk of these songs are sturdy constructions and King and Kubek swap leads and vary the song lengths and tempos just enough to make this the kind of blues record you can start at the beginning and glide through to the end.  Have Blues, Will Travel is one of the year's best.