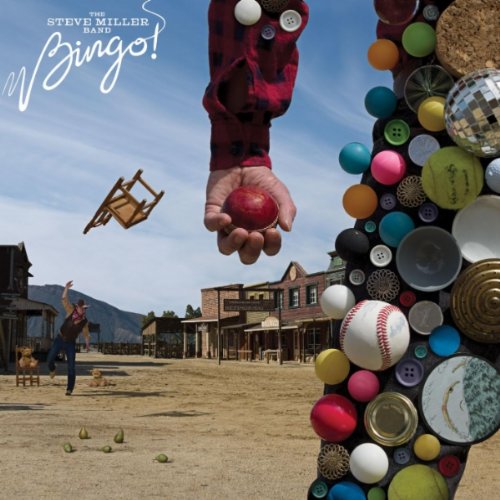 It will come as a surprise to casual fans that Steve Miller has a blues side.  His hit singles remain staples of classic rock radio and they still sound fantastic.  I love "Fly Like An Eagle," "Rockin' Me," and "The Joker."  I crack up singing along with "Take The Money And Run."  These are staples of FM radio but they don't bear any significant blues influence.  I groaned and winced when I learned Bingo!, the first studio album from SMB in more than a decade, was going to be a blues covers collection.  Sure, a young Steve Miller jammed with T-Bone Walker, met Les Paul as a child, and hung with a lot of the great bluesmen and musicians.  I knew he loved the music and has dabbled with it throughout his career but can the Space Cowboy convincingly pull off these blues?  How would he try?  Would he try morphing himself and his band into a badass bunch of kids from Chicago or Memphis?

The answer to that last question is no.  Steve Miller Band brings the blues to them rather than trying to play it straight on Bingo!.  A smile spread across my face within the first 30 seconds of Bingo! as I heard all the elements found in my favorite SMB songs. The decision to adapt these blues songs to his sound and record them his way was clearly the right choice.  This isn't blues for purists.  It may not even be blues at all.  It is a hell of a lot of fun if you're willing to put the CD in the player and crank the volume.

Opening track "Hey Yeah," a Jimmie Vaughan tune, has those smooth, polished, spacey sounds, processed harmonies, and sweet guitar licks so important to the SMB classic sound and it's surprising how good they sound here.  "You Got Me Dizzy" is another that bears all those classic elements familiar to '70s FM listeners and like "Hey Yeah," it works.  He tells us in the great liner notes accompanying the deluxe edition of this release he knew and often played with Howlin' Wolf but he isn't making any attempt to faithfully recreate Wolf's rendition of "Who's Been Talkin'," even if there is considerably more traditional sound on it than "Hey Yeah."

Guitar virtuoso Joe Satriani sits in for two songs on Bingo!, the first being the ubiquitous "Rock Me."  As Miller notes, it's been played by everybody perhaps most notably by B.B. King.  As a longtime Satriani fan, I was interested in hearing Joe blast some blues and the pairing is interesting but also surprising in the restraint.  It's admirable too such capable players keep things in check while still delivering some sizzling licks.  It's also a little disappointing..  Why bring in one of the greatest guitarists on the planet to play with a more than capable lead man if you're going to hold back?  The rhythm section locks into the song's natural groove even though it plays more to the rock than the blues.

The real surprise on this set for me is "All Your Love (I Miss Loving)."  I tend to strongly dislike most Otis Rush covers because Rush is my all-time favorite bluesman.  The SMB rendition in no way compares to the classic original Rush cut for Cobra in the '50s, but Miller's rhythm section is nimble enough to create a nice rumba and the rounded tones of Miller's lead work nicely.

Bingo! doesn't take itself seriously and yet the reverence Miller feels for these artists and their songs and the years he's spent listening to and playing them shines brightly.  These guys sound loose even in the polished, manicured production.  They sound like they're having fun and if that is where Bingo! finds its way to the blues tradition.