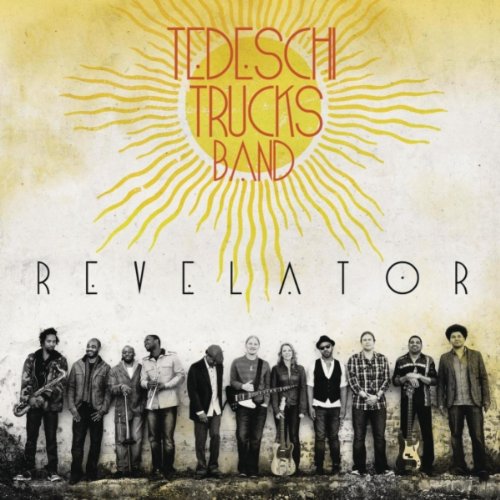 One of the first things you notice before you even get to listen to a note of Tedeschi Trucks Band's Revelator is the sheer size of the band pictured on the front of the CD. We're used to rock trios, quartets, and quintets. We've seen some bands grow beyond that- The E Street Band, for instance. An 11-piece rock band? Where's the template for that?

Derek Trucks and Susan Tedeschi said the majority of these songs began as spare, acoustic sketches that evolved when presented to the band in the studio. From that perspective, the material did grow in scope and complexity but don't let the largess of the band or the Trucks' work with his own Derek Trucks Band or the Allman Brother Band lead you down the wrong path – get the wrong idea. This is a song-oriented record, not a collection of loose or extended jams.

It's a surprise but a welcome one because the songs that made the record are mostly excellent. Tedeschi sings as well as ever, brimming with confidence and fueling these songs with toughness, tenderness, and warmth. Trucks is a beast on slide guitar and he plays all over the place, yet it doesn't feel like he's overplaying.

There are some weaker moments on the record but not many and they don't detract much from what amounts to a professional, well-produced album. The highlights of the record are "Until You Remember" and "Midnight in Harlem." These two stand out largely on the strength of the vocals. Trucks delivers a staggering slide solo on "Until You Remember" and the song runs for more than six minutes but the emotion and humanity that makes these songs special comes from Tedeschi.

I had trouble warming up to Derek Trucks Band and listening to Revelator, now I know why. As technically gifted and evocative as Trucks' playing is, there was something missing on DTB albums. He needed the right singer and the right songs, and he's found them.