The Black Crowes are a vintage band for modern times... 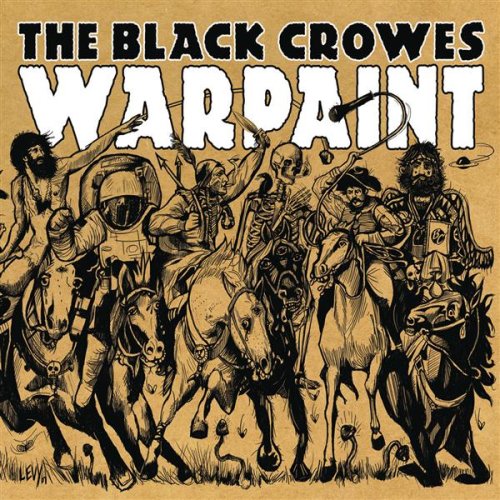 You've really got to hand it to The Black Crowes.  It takes balls to add a slide player like Luther Dickinson (North Mississippi Allstars) to the lineup when you've been chided your entire career for being a Rolling Stones/Faces cover band.  The Robinson brothers have never been afraid to shoot the bird at their critics – or each other, for that matter – and Warpaint is their latest middle finger to the world.  These guys never run out of hands, do they?

The album opens with the fantastic "Goodbye Daughters of the Revolution," a song with the kind of catchy chorus these guys should be famous for.  Dickinson doesn't wait for a guitar solo to make that sleazy slide a presence nor does he disappoint when that first invitation to solo is extended.  Chris Robinson may not have had Luther in mind when he sings "come join the jubilee," but Dickinson sounds right at home.

Some fraud at Maxim wrote off the entire album having only heard that one song.  I don't know what he was listening to because I felt like this was money well spent five minutes into my $15 investment.  Be not deceived, listeners.  Of course "Daughters" would have sounded right at home on Let It Bleed.  When the hell did that become a bad thing?

"Walk Believer Walk" is a convincing 21st Century slice of classic rock and classic blues. Rhythm guitarist Rich Robinson's guitar grinds hard with some sinister snarl while Dickinson's slide stings almost as hard and sweet as anything that ever came out of Chicago.  Too bad the Maxim fraud didn't wait to hear this song before panning the record.  His educated guess that Warpaint was going to be more of the same from a band that has allegedly never played an original note in their career is as fraudulent a conclusion as the review itself.  I haven't heard every note of every BC record nor have I heard them sound better than they do with Dickinson.  I don't know if that amounts to musical growth but it sure as hell isn't more of the same.

Fellow writer El Bicho praised the band's ability to craft memorable ballads.  I don't know that I've ever heard anyone mention that about them but he's absolutely right and "Oh Josephine" is a great example.  Chris Robinson's penchant for doing and saying some dumb things has made it easier for critics to marginalize him.  Try marginalizing him after listening to a beautiful song like "Oh Josephine."  Try marginalizing him after listening to any of these first three songs.  He may not be the greatest singer or songwriter of his generation but when he's at his best – and this opening trifecta is indeed the man at his best – these comparison games seem quite silly.

"Evergreen" is a little heavy on  Robinson's dippy hippy imagery and the chorus is inferior to the verses but the song is pleasant.  "We Who See The Deep" is also a little heavy on hippy rhymes but is backed by a massive riff from the school of Keith Richards and Jimmy Page.  Robinson morphs into a cross between John Lennon and Robert Plant on the psychedelic-tinged "Movin' On Down The Line," which is the best of this grouping and one of the highlights on the record.

Rich Robinson gets things fired back up again with a stomp-and-groove riff on "Wounded Bird."  Robinson's riff reinvigorates Dickinson, whose slide is once again a force.  If only Steve Forman would lay off the seizure-inducing cymbals during the last minute of the song.  That prolonged Alex Van Halen-styled aggravation makes my heard hurt.  Despite that, "Bird" rocks hard and kicks the album back in gear.

They follow that with a cover of "God's Got It."  It's not revelatory in any way but it's not bad listening.  Dickinson's acoustic slide on album closer "Whoa Mule" feels almost like a second vocal line, just as expressive as Robinson's vocal.

Chris Robinson's poetry isn't always pretty and one gets the sense he is trying to be poetic and profound, perhaps trying a little too hard at times.  His reach sometimes exceeds his grasp but when he and his cohorts get their fingers and hearts around an idea and a groove they make music that stands proudly among the songs that have obviously so inspired them.

Maybe the conclusion to draw isn't that The Black Crowes are derivative of bands from yesterday but that they were just born at the wrong time, that they are playing a brand of music too many critics grew up on and are too eager to freeze in time.  Maybe it's time to stop thinking of them as a contemporary band ripping off vintage music and instead see them as a vintage band for modern times.