a magnificent realization of the music of Don Carlo Gesualdo... 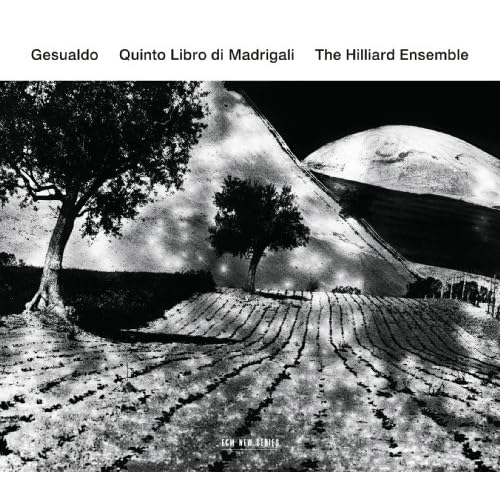 The Hilliard Ensemble is a British male vocal quartet who were formed in 1974. Their modus operandi has been to perform early music such as that of the Medieval and Renaissance eras. Of the original lineup, only countertenor David James remains. The other three members are Rogers Covey-Crump (tenor), Steven Harrold (tenor), and Gordon Jones (baritone).

The quartet have had a long association with the ECM label, which began back in 1987 with the Tallis: Lamentations of Jeremiah album. The ECM New Series line has been a perfect fit for the Ensemble, as they have enjoyed a number of very successful projects over the years. In 1994, The Hilliard Ensemble collaborated with the great saxophonist Jan Garbarek for an album titled Officium. The recording sold 1.5 million copies, and led to two sequels, the two-disc Mnemosyne (1999) and Officium Novum (2011). They have also worked extensively with the brilliant Arvo Part over the years, among others.

For their latest release, Quinto Libro di Madrigali, the quartet have added Monika Mauch (soprano) and David Gould (second countertenor). The Quinto Libro di Madrigali was composed by Don Carlo Gesualdo (1560 - 1613). Gesualdo was considered an avant-garde composer by his contemporaries, and is often described as being ahead of his time. His music was not really appreciated or understood until much later - in the 19th century High Romantic period.

With the Quinto Libro di Madrigali, the Hilliard Ensemble have recorded Book Five of Gesualdo’s five-part madrigals, (which total six books) composed between 1594-1611. The 55:16, 21-track recording is a beautifully rendered interpretation of this music. The way the Ensemble’s voices blend is really something special, and the addition of Monika Mauch and David Gould just add to the overall impact of the entire set.

While the Quinto Libro di Madrigali is not to be confused with the genre of Gregorian chant, there are some surface similarities. For the layman, the all-choral nature of both forms may appear to have a bit in common. I mention this because of the enormous success back in 1994 of Chant by the Benedictine Monks of Santo Domingo de Silos. I think Quinto Libro di Madrigali might appeal to the many fans of that recording. Then again, considering the fact that the Hilliard Ensemble’s own Officium sold so well, they quite obviously have their own devoted audience.

As previously mentioned, this fifth book of Gesualdo’s madrigals consists of 21 sections. The lyrics are reprinted in the booklet, and are very moving. It is the sound of the Ensemble’s voices, or to be more precise, the arrangements of the vocals which is the most impressive element of the disc. Quinto Libro di Madrigali was actually recorded back in 2009, in the acoustically vibrant Propstei St. Gerold in Austria. This was the location of the Hilliard Ensemble’s earlier Don Carlo Gesualdo composed Tenebrae (1990), also on ECM.

To put it simply, Quinto Libro di Madrigali is a magnificent realization of the music of Don Carlo Gesualdo, and should not be missed by fans of one of the most outstanding vocal ensembles of our time.