Golub is good, but he's not royalty 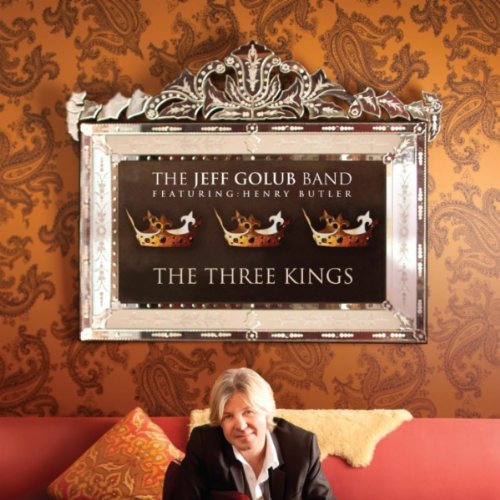 The guitar is ubiquitous in modern music, and the level of technical proficiency that some players have achieved is utterly breathtaking. Yet music isn’t just about the notes. It’s about the message. It’s a form of communication, a method of storytelling. Which is why guitarists with the ability to play almost anything continue to return to the simplicity and honesty of the blues. It may not be the most technically demanding of genres, but within the blues, each note matters.

Jeff Golub has played a lot of music in his time. A Berkley graduate, he’s probably best known for his tours and recordings with Rod Stewart. He started out, though, as a member of James Montgomery’s Blues Band, and remembers being captivated by the sounds of the Grand Ole Opry as a youngster. Here he pays tribute to the three kings of the blues guitar – B.B., Albert, and Freddie, all of whom are widely recognized as seminal influences, direct or indirect, on just about anyone who’s picked up a guitar since.

Enlisting the aid of New Orleans piano legend Henry Butler, Golub tears through tracks made famous by each guitarist, with a couple of instrumental originals for good measure. Also guesting on a track each are guitarists Sonny Landreth (slide) and Robben Ford. Butler contributes gruff vocals on a handful, with drummer Josh Dion handling the rest.

Apart from the originals, most of the material is representative, B. B. taking the lion’s share of the playlist with “Let The Good Times Roll,” “Help The Poor,” “Every Day I Get The Blues,” and an instrumental take on his signature tune, “The Thrill Is Gone.” Albert’s songbook yields “Born Under A Bad Sign” and “Oh Pretty Woman,” while Freddie is well-represented by classics “Have You Ever Loved A Woman” and “I’m Tore Down,” along with the lesser-known “Side Tracked” and “Freddie’s Midnight Dream.”

Performances throughout are all top-notch, and the material is, for the most part, impeccable – standards recognizable to even the most causal of blues fans. The only misstep is Butler’s “Three Kings,” a well-meant but ultimately pedestrian tribute with virtually unlistenable lyrics (“He played throughout the world / touching the hearts of lots of boys and girls”).

Golub is a consummate master on guitar, with precise articulation and unerring taste. He’s not out to replicate what’s already been done, though he keeps each song’s structure intact – there are no radical reinterpretations here. Instead, Golub takes a more modern and ‘busy’ approach, with more notes and less space. It’s all done with impeccable skill, but somehow – despite his undeniable abilities and flawless execution – the end result is pleasant rather than memorable. Head to head, there’s little doubt that Golub is, technically speaking, a better guitarist than any of the Kings he’s saluting. But what made them kings was an instantly identifiable style, a sound full of fire and fury, urgent and downright dangerous. Compare, for example, his cover of “The Thrill Is Gone” with of B. B.’s immortal original. Golub is all over the melody, with lots of immaculate fretwork. But his take on the tune lacks the stark, brooding intensity that renders King’s version so memorable. Golub’s is an exercise, a object lesson on how to play the guitar – but it’s not an artistic statement destined to endure.

As tributes go, there’s absolutely nothing wrong with this collection, and lots to admire. Lacking in passion and hunger and raw need, though, there’s not really much to love about it. Golub is very good, but he’s not royalty.