Review: The Rounders - Wish I Had You

Nearly every contemporary music genre has some root in the blues; some genres more than others but the relationship is almost always there.  Rock and roll probably owes the largest debt to the blues as evidenced by the hundreds, maybe even thousands, of bands who have merged those two sounds.  There are two common camps in 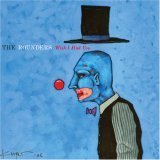 the blues-rock world.  There's Southern rock as popularized by The Allman Brothers Band, Lynyrd Skynyrd, Marshall Tucker, etc.  There is also what I call the Stones rock approach to combining the blues and rock: The Black Crowes are a good reference point for this style.

I'm reluctant to say Oklahoma City's The Rounders have found a unique way to fuse the blues with contemporary music because so little under the sun is new, but I am comfortable saying they may have found a couple of new wrinkles.

The Rounders have found a way to combine a '90s alternative sound with the blues on Wish I Had You, their first album for Blind Pig Records, released earlier this year.  In some ways, this is the perfect band for me.  I'm a child of the '90s and I've become an avid fan of the blues.  For some reason, Collective Soul, Candlebox, and Blind Melon are the bands that come to mind when I listen to this.  I realize that's not exactly the pinnacle of the alternative movement, but don't let that scare you away because The Rounders don't sound like carbon copies of any of them.  Combining these two sounds is a fresh idea and one that works surprisingly well...  most of the time.

The album opens with “God Knows I'm Trying,” a song that can only be described as damn cool.  Brian Whitten's vocal is restrained, yet smoldering.  That's a damn difficult thing to do, and he nails it.  A lead guitar figure plays throughout the intro, verses, and choruses.  Stu Williamson's drumming and percussion is near perfect — I can probably count on one hand the number of times he reaches for a cymbal.  The rhythm is pounded out on snare and bass drum, with a shaking tambourine mixed low into the background.

The unquestioned highlight of the album is “Through No Fault of My Own.”  The band must have known they were on to something, allowing it to stretch longer than any other song on the album.  The guitars snarl more, and so does Whitten's voice.  His vocal and Dustin Arbuckle's harmonica howl righteously, both touched up with some effects.  This is a contender for song of the year.

The guitars on the title track are thicker than those on “God Knows I'm Trying,” but it is by no means hard rock.  “Wish I Had You” is another slow burner, similarly drummed.  These songs never become showcases for flashy solos or mindless noodling despite the presence of two guitars.  The interplay on “My Getaway” is a little more interesting, but the vocal and the song a bit more generic.

The knock on The Rounders is that they will sink or swim on the strength of their songs.  Whitten has some great vocals on the album, but he doesn't have the kind of superstar voice that can elevate average material.  Similarly, the musicians either can't or choose not to let loose.  That absence of bombast can be refreshing when a song is interesting enough on its own merits, but it can be boring when there's nothing to generate any kind of spark.

There are enough good things about this record and enough good songs to recommend it.  There's enough promise to think their next effort might be even better.