A portrait of a charismatic talent... 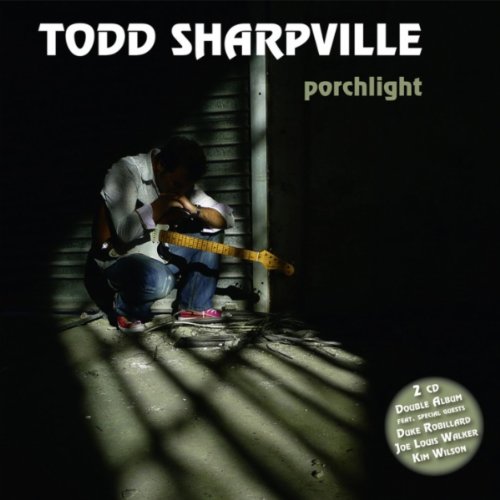 I can't remember many times in my life when something came easily to me. I'm not suggesting I've had to work hard for what I've gotten because I have a lot of quit in me-- perhaps exceeded only by laziness. What I'm trying to say is I spend a lot of time stuck at Square One, frustrated as hell. Sometimes I cross that magical finish line and other times I order pizza and queue something up on Netflix.

This review has been on my "to do" list since late last year when British bluesman Todd Sharpville released his double album Porchlight. Life and the album have confounded me in the intervening months but a whole lot of intermittent listening and a touch of determination have brought us all together now.

There are times I've listened to a disc, taken nothing from it, and allowed that to be my final answer. There is value in immediacy and first impressions aren't always wrong but I've been rewarded so damn many times by sticking it out. I'm a slow learner but I can be taught. Porchlight taught me. Perseverance means I'm writing a much different review, one I believe is ultimately more accurate and I hope more informative to all of you.

I wasn't awed the first time I listened. It didn't put me off but nothing about it grabbed me. It was pleasant enough but just felt flat. That's where I started but I've come around. There's a well-rounded, interesting personality to be found on this record. Shaprville often writes from a place of hurt, pain, and disillusionment but sometimes approaches those feelings and the events that led to them with an anarchist's wiseass sense of humor. You have to be able to if you're going to record Shel Silverstein's "If That Ain't Love What Is?" and have it make any kind of sense buttressed against the rest of the record. Why so serious, right?  He's not joking about a father's plea to continue to be part of his children's lives after a divorce but has the wicked tongue to frame this in the context of being a "Lousy Husband (But A Real Good Dad)." This gift is part of what makes Porchlight shine like it does, when it does.

It's not all fun and games on this record. Sharpville wrote 14 of the album's 15 songs and they often feel intensely personal. He lacks the frenzied power and range of some of his contemporaries or influences but can be a wildly effective and charming vocalist when paired with the right material. He may well be at his best on the final track of disc one, "Old Feeling." American Idol or Britain's Got Talent if we want to be geographically correct have taught us you can find great singers on any corner on any given day but not just anyone can give birth to a spark. Sharpville does that with his voice and ability to get inside his own songs.

The first disc is the stronger of the two with Kim Wilson providing cover for the grinding "If Love Were A Crime" that opens the album, followed by "Lousy Husband." "Why Does It Rain?" is a slow, wrenching ballad and "Old Feeling" displays his smoky croon at its most effective.

His guitar personality is rather like that of his vocals although he has more range of expression with the instrument in his hands. He doesn't pummel you with hot licks or flurries of notes, picking and choosing places to burn such as his duel with mentor and friend Joe Louis Walker on "When The Blues Come Calling." That he keeps it tasteful is good but you find yourself looking for a little dazzle when he stretches songs past six, seven, and eight minutes. That as much as anything is why it took me awhile to warm to this. A 15-song record isn't long by song count in the CD age but these 15 songs are spread across two CDs because some songs stay past their freshness date.

There are a lot of good ideas well executed. It's easy for listeners to get lost and that's a shame. Those who stick around will hear a portrait of a charismatic talent who can, and often does, straight burn with pure fire in his soul.