Fun for the faithful but not quite essential... 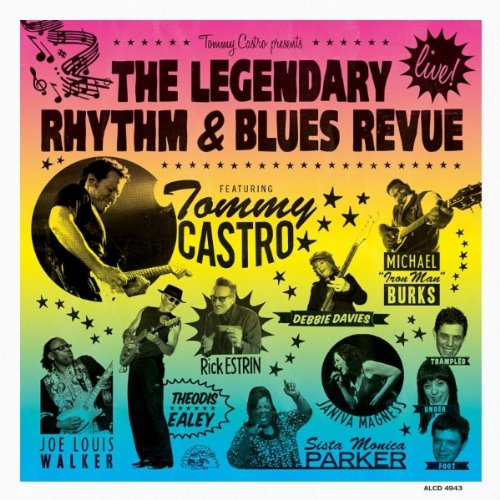 Tommy Castro swept the 2010 Blues Music Awards in support of his Alligator Records debut Hard Believer. Among the awards he took home were the BB King Entertainer Of The Year and he and his band took home the award for Band of The Year, accomplishments that reflect a lot of time spent on touring. It's no surprise, then, he followed up Hard Believer with a live release, Tommy Castro Presents The Legendary Rhythm & Blues Revue.

The 12-track release features a slew of guest artists playing with Castro and/or his band, four of which were recorded on the 2010 Rhythm & Blues Cruis with others coming at various tour stops along the way making this more a collection of live performances than a proper live album. Among the many guests are the great Joe Louis Walker, Rick Estrin, Debbie Davies, Janiva Magness, Michael "Iron Man" Burks, and Trampled Under Foot. That's a lot of blues firepower resulting in some excellent performances.

Joe Louis Walker's "It's A Shame" would have been the high point for me even if I wasn't such a big admirer of his talents. Walker is dominant form vocally and his guitar work is explosive. Castro's band provides excellent backing, particularly the horn section. Castro sat that performance out, allowing Walker to lead his band. He also steps aside to let Rick Estrin and fellow Nightcat Kid Anderson to front his band. Estrin is an average vocalist but his mastery of the blues harmonica puts him among the best working today and he blows some serious harp on "Next Ex-Wife." Anderson also gets a feature moment.

My favorite Castro performance is "Painkiller," the title track from his final Blind Pig record. His band cooks on a gospel-blues raveup performance of Dylan's "Gotta Serve Somebody," but neither Castro's lead vocal nor the call-response backing vocals find that same groove. His lead work is stout but gets a bit excessive beyond the first solo, carrying the song out longer than it needed to go but that first solo and strong support from his band keep this from being a miss; it doesn't quite hit.

Tommy Castro Presents The Legendary Rhythm & Blues Revue has moments of fiery energy and well-meaning, fun-loving excess, meaning it's like most star-studded live albums: fun for the faithful but not quite essential.