Review: Tuatara - East Of The Sun

I was skeptical when I learned Tuatara's new record was going to feature vocals.  I was more than skeptical, I was unhappy.  I had a rigid sense of what a Tuatara record should be.  I knew without having to check the credits in the 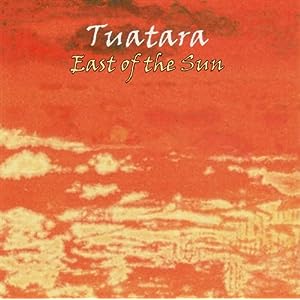 liner notes that Peter Buck played anything except for electric guitar and Barrett Martin played 15 instruments with unpronounceable names and exotic sounds in addition to some work behind the standard rock drum kit.  That is the Tuatara formula, and it gave birth to four fabulous, unique records.

I had no doubt this new music could be good, but no one else makes records like these guys did.  There is no one else to pick up this mantle if they stop.  When East of the Sun arrived in the mail, I waited a few days to listen to it.  I never do that with new music, but I needed time to let go of my expectations.

It was difficult not to obsess over what Sun is not.  This is by no means a simple guitar-bass-drum record, but it doesn't incorporate as many unusual instruments or sounds as past records.  I miss some of those exotic sounds.  As is so often the case, the easy road is not the best road.  To dismiss the record because of the change in direction is to miss out on a deep, rich musical experience.

Just learning of the roster of voices on the album helped soften my attitude before I'd even heard a note.  Scott McCaughey (The Minus 5), Mark Eitzel, and Victoria Williams are all familiar to me.  East of the Sun proves Tuatara has a better Rolodex than I do.  In addition to those three, Tuatara is joined by the voices of Jessy Greene, Gary Louris, Dean Wareham, John Wesley Harding, Gina Sala, Mark Olson, and Coleman Barks.  Ottmar Liebert provides Flamenco flourishes to two songs and Rahim Alhaj Arabic Oud on "A Spark in the Wind."

The titles of multi-instrumentalist Barrett Martin's two solo records inform East of the Sun.  This album could live in The Painted Desert of his first album and could be the message from the earth and spirits of his second, Earthspeaker.  Some of these messages from Sun are declared boldly – "take religion out of the picture" — others are whispered and will only reveal themselves through repeated listens over time.  Shifting from one vocalist to another might cause some records to feel disjointed and chaotic, but this diversity is one of Sun's strengths.

A palette of Southwest and Far East textures creates a sonic journey through different times, places, and spiritual planes, aided by the presence of different voices over the course of 15 songs.  A cascade of Middle Eastern sounds surround a narcotic vocal from Mark Eitzel to make "A Spark in the Wind" a dense, hypnotic drone.  It is one of the best examples of what makes this album so engaging, balancing the exotic and the familiar, the challenging and the accessible.

East of the Sun is not a concept album in the strictest sense of the word, but the story it begins will be supplemented in September (September 11th) by West of the Moon.  Are East and West two different but related stories, or are they two perspectives of the same journey?  We'll know more in three months.  In the meantime, we have the first half of the puzzle and it stands brilliantly on its own.  East of the Sun overcame my initial reservations about a Tuatara record with vocals.  I'm looking forward to its companion.