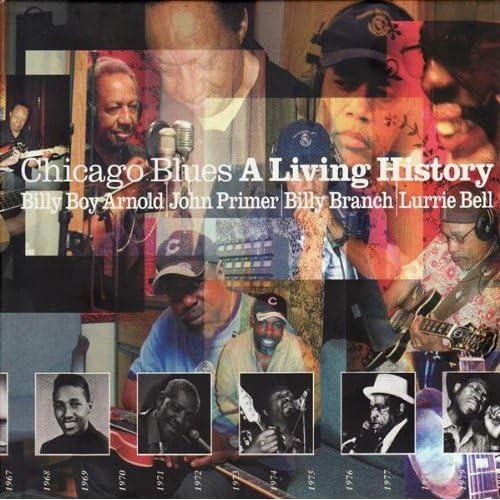 If I have this right, the premise of Chicago Blues – A Living History was to round up a slew of Chicago blues veterans and have them record their own versions of Chicago blues classics.  That’s so crazy it just might work, right?

While the idea lacks daring, it's not without risk. Used CD stores and cutout bins are littered with tribute albums featuring major talents recording major works and all too often the results prove underwhelming. It’s like all the alleged supergroups in rock history; somewhere the math gets in the way and the whole ends up being less than the sum of its parts.

If a song is popular enough to be classic, it has already been covered ad nauseum by talents minor and major.  That's the thing about classic material: it's classic. It's not easy to get excited about hearing someone else take a stab at a song that's already beloved.  Great singers – revered singers – the world over have sung "The Christmas Song" but no one cares about any version other than that of Nat King Cole.  The people have spoken.  Scoring par on the toughest hole is still just a par, and that’s what A Living History is up against.  Taking on classics by Muddy Waters, Otis Rush, Buddy Guy, Sonny Boy Williamson, Willie Dixon, Howlin’ Wolf, and others of that ilk would have been too much to overcome for most contemporary talents, but the four primary soloists and their backing band are more than up to the challenge on nearly every track of this two-CD set.

Those four principle soloists – Lurrie Bell, Billy Boy Arnold, John Primer, and Billy Branch – probably have a century of combined Chicago blues experience, working as frontmen as well as session aces to some of those same luminaries whose work they cover on this set.  The same is true for their backing band, with vets like Kenny "Beady Eyes" Smith on drums (son of the great Willie "Big Eyes" Smith) and Billy Flynn on rhythm guitar.

It’s easy to lose track of time as one strong cut bleeds into the next.  Sprinkled among the consistently solid moments are some real standouts.  Harp ace Billy Boy Arnold again pays tribute to his mentor John Lee "Sonny Boy" Williamson (the first artist to play under that moniker) on "My Little Machine" and turns in a charming performance of the bawdy "She’s Love Crazy."  One time Muddy Waters’ sideman John Primer is outstanding up and down the album but perhaps never better than on his former boss’ classic "Sugar Sweet."

Whoever paired Lurrie Bell with "My Love Will Never Die" should get some kind of godlike genius award.  This is a combination created just for me.  "My Love Will Never Die" was one of the most passionate, intense declarations Rush ever recorded.  There aren't many bluesmen who can deliver the intensity, passion and romance this song calls for.  "My Love" gives Bell a chance to flex his interpretive singing muscle and — I hate to continue with golf metaphors — he parks it.

I don’t know how much time the four principles have spent on a golf course but they’ve been working the blues circuit for decades.  What they’ve achieved here might not be as spectacular as a hole-in-one, but they’ve certainly done better than par.  We’ll call this set a birdie.