Watermelon Slim has made a fabulous record that demands serious consideration in any discussion about the best blues records of this year. 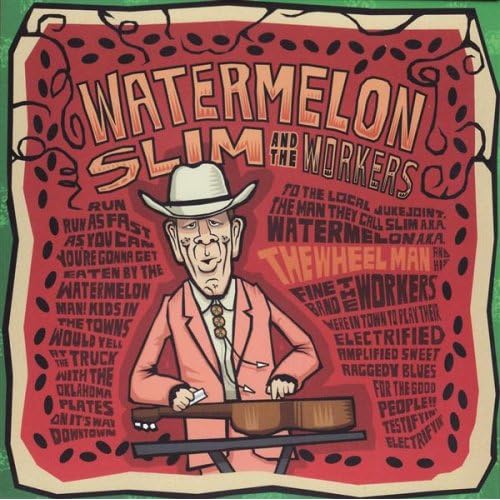 I knew I had one of the winning releases of 2007 within the first five minutes of hearing this album.  The title track and the beginning of "I've Got News" spill such an abundance of blues chops and enthusiasm it seems inconceivable Slim & The Workers could run out of either before the album's end.  Chops and feeling are arguably the two most important ingredients in great blues, and enthusiasm and passion burst from this record.

That enthusiasm is contagious.  I started writing previews of the record and e-mailing my contact and other blues-loving friends, telling them how great The Wheel Man is.  It defeats the purpose to go on and on about how great a record no one else can order is, so I've tried to keep my gushing in check.  Now I can break free of those shackles and lavish praise on this record with reckless abandon.

“The Wheel Man” teams Slim & The Workers with the inimitable Magic Slim for one of the more enjoyable blues duets of recent memory.  The pairing works because of the energetic nature of the performances and the song itself.  “The Wheel Man” is a rollicking good ride with some super slide work from Watermelon Slim and a more traditional, Chicago-style solo from Magic Slim.  This has to be the early favorite for “Song of the Year” at the 2008 Blues Music Awards.

One of the strengths of The Wheel Man is its sequencing.  The song lengths are varied and longer songs are packed between shorter songs and it, giving a real sense of flow to the album.  “I've Got News” and “Black Water,” along with the title track, form a powerful opening trifecta.  “I've Got News” shows off Slim's ability to blow some fancy blues harp and “Black Water” combines searing slide work with Slim's strongest vocal on the record.

The opening trio is nearly equaled by the closing trio of “Rattlesnake,” “Peaches,” and “Judge Harsh Blues.” “Rattlesnake” is another showcase of Slim's harp ability, backed by some snarling guitar.  “Peaches” has a touch of the swampy feel of CCR's “Born on the Bayou” and album closer “Judge Harsh Blues” is a good, solid acoustic number that recalls The Stones' take on Prodigal Son” from Beggars Banquet.

Another of the great strengths of The Wheel Man is its consistency.  There are no weak moments on the disc, although the traditional, a capella “Sawmill Holler” might not be for everyone.  Even with musical accompaniment, it can take a little time to adjust to Slim's diction.  The lack of it makes “Sawmill Holler” a little less fun than the rest of the record but not so much that you'll want to skip over it.  These songs hang together and flow in and out of one another, creating a more satisfying listen than the wonderful self-titled album currently nominated for 6 BMAs.  The self-titled predecessor has a few more peaks, but also comes with a couple of valleys.

Power, passion, joy, and skill permeate this record.  Those attributes, when applied to good songs, are the formula for a great record.  It is the formula for The Wheel Man. Watermelon Slim has made a fabulous record that demands serious consideration in any discussion about the best blues records of this year.