He's worn many hats throughout his life and those stories are now songs... 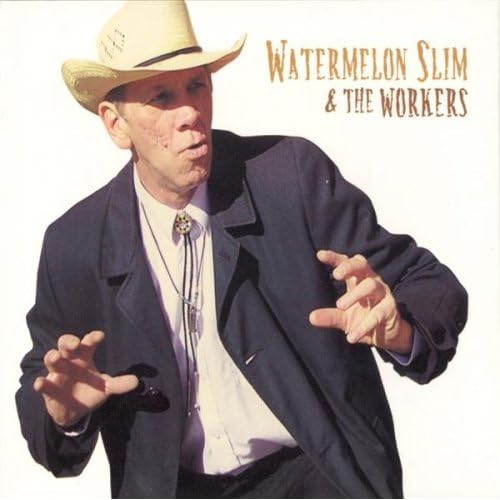 Watermelon Slim (aka Bill Homans) has one of the best biographies of any artist of any era, and you get a taste of that life story on his self-titled release for NorthernBlues.

The album opens with “Hard Times” and if that isn't a quintessential blues title, I don't know what is.  The blues has come a long way when you hear lines like “I'm too frustrated to see my psychiatrist.”  Slim's lyrics may reflect a degree of modernity, but his marvelous slide work would make the early masters proud.

Speaking of traditional, the acoustic slide work on “Folding Dollar Blues” is stunning and is as good as any I have ever heard, with the guitar sound bearing just the slightest resemblance to The Doobie Brothers' “Black Water.” These are workingman's blues, phrased with flair.  Slim has a conversation of sorts with the dead presidents on his money, starting with George Washington working sequentially all the way up to (non-president) Benjamin Franklin as he watches his cash fritter away (I feel compelled again to say Alexander Hamilton wasn't a president, lest you all think I don't know my history).  First the taxman takes his cut, and what's left goes to his woman, leaving him looking for a spare dime.

The coolest moment on the disc has to be “Devil’s Cadillac.”  The imagery in the lyrics is fantastic, creating a stylish update of the legend of Robert Johnson selling his soul to the devil in a bid for blues greatness.  Slim and Satan may be racing 90 miles an hour in a Cadillac as silent as the inside of a hearse, but “Devil’s Cadillac” rides at a slower pace.  The minimalist, grooving rhythm track leaves a wide lane for some sleek, sinister slide work.  For some reason, this song evokes the scene from Pulp Fiction where John Travolta’s Vincent Vega shoots up and goes on a little "trip" every time I listen to it.  Weird.

Perhaps the most surprising highlight of the set is their version of Willie Dixon’s much-performed classic “Baby, Please Don’t Go.”  This song has been recorded by damn near every blues artist since it was written.  If asked, I would have said we needed one more version about as much as we need another season of American Idol.  Still, Slim injects some vitality into this standard with a fabulous harp solo and perhaps his finest vocal performance on the album.

The strengths of this album are the musicianship and the songwriting.  Slim demonstrates a rare mastery of slide guitar, harp, and dobro.  The Workers provide solid, subtle, sonic scenery.  They never overpower the songs, nor do they miss a beat.  Think of it as a good sipping whiskey for the ears.

The weaknesses are few, but should be noted.  It took some time to get used to Slim's voice and delivery.  His delivery is sometimes grandfatherly and is not as effective on some songs as it is on others.  At 14 songs and 52 minutes, the album might have been better served were it a song or two shorter.  I would probably trim the French language “Eau De Boue,” for starters, but that is just me.

I may always think first of Muddy, Otis, and Buddy when I think of the blues, but I no longer think of contemporary artists recording traditional blues as an oxymoron.