October 2, 2012 will go down in history as the day the collective squeal of Renelians over the release of the long anticipated Chris Rene EP I'm Right Here annoyed neighbors, friends and spouses worldwide. Chris Rene was the third 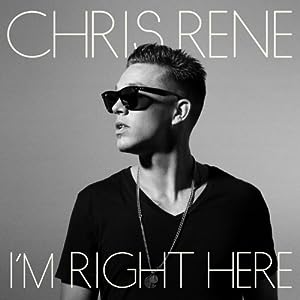 place finisher on last season's X Factor and America collectively and immediately fell in love with his strength, courage and faith having only just completed a rehab program before trying out for the Simon Cowell vehicle that launched his career and changed his life in one fell swoop.

The CD starts off with “Chains” which is super beat driven, almost remix-fast and definitely catchy. It takes a couple listens to hone in on the positive message in the lyrics: “Live our lives right where we are instead of where we want to be” and “This ain't no fairy tale, I made life-long friends in jail I, love them 'til the day I die” followed by “you remind me a little of me.” It's just a good, positive song from someone who's been in the trenches and lived to tell about it. While the music is your standard fare with nothing earth shattering, the lyrics are where it's at with this song and subsequently the majority of the tunes on this EP.

Next we get what quickly became my favorite track on the EP, “Rockin' With You” which details the evolution of a player to a one-man woman. “I did my dirt...but who ain't got a past” is followed by “To make a long story short, I'm only rockin' witchu” and comes clean about girls in his past and how his future looks brighter with just one girl. It's super catchy and fun. Third up is a song that has grown on me but it's still kind of a throwaway although the idea and concept of “Back From The Dead” is solid, it falls short. But, Chris' voice sounds agonized and strong, a powerful and convincing vocal performance by a guy who was called out for a weak voice continuously on The X Factor.

Receiving perfect placement in the middle is “Trouble” which was the second single released off this CD and I reviewed the video and single last month and had a lot of fun with. It's a great shift and called for after the last heavy song. “Gonna Be OK” starts off with a nice eerie, echo-y sound recalling darker days and telling the listener that no matter how backed up against the wall you feel, it's gonna be OK. He goes on to recall his punk rock days of listening to Adolescents and using his mind as a weapon- basically saying just keep pushing forward, there's always something worth staying positive for.

“Love Me Like You” is by far the sexiest song offered and has a heavy, sultry beat that's a little reminiscent of “Same Blood” off Chris' indie effort Soul'd Out in sound, not content. Lyrics like “You got that ass you got that swag, You got that shit I need so bad” and “I miss the way you ride me, We used to do it nightly” tell the story of a love that slipped away but, he'd very much like to have her back for her...big heart.

Capping us off we get “Young Homie” which at this point is an old friend and a welcomed ending to a consistent if maybe fluffy major label debut effort from everyone's favorite underdog, Chris Rene.

While this isn't a CD that would have likely made it into my collection (if I hadn't been forwarded the promo copy) I understand why you'd want it in yours. I have an email interview I'm waiting to get answered by Chris and as soon as he does, I'll be posting it here, be sure to check back.