Tired of ‘Americana’ yet? Vickers and friends will change that!

As a genre, the notion of ‘Americana’ – rootsy music that begins with folk but encompasses every indigenous format from blues and ragtime to country and good ol’ rock and roll – is in danger of becoming a tired cliché. What else, though, to call a collection that ranges from hokum to honking rhythm & blues, countrified rock ‘n’ roll to a rockabilly rave-up? 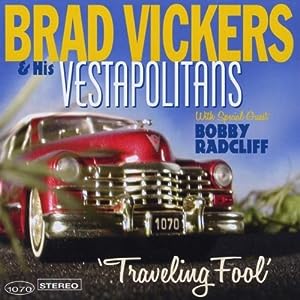 As the bassist for New York-based Little Mike And The Tornadoes, Brad Vickers recorded with Pinetop Perkins, Hubert Sumlin, and James Cotton while all three were on the Blind Pig label back in the 80’s. He also worked with the likes of Willie ‘Big Eyes’ Smith, Jimmy Rogers, and Rosco Gordon, all ‘elder statesmen’ of the blues. As leader of his own Vestapolitans, though, he steps up front as lead guitarist and main vocalist. His fretwork is just fine, and while he’s not likely to win any awards, his laconic vocals are a comfortable fit for the material.

What’s truly remarkable is the strength and variety of the songwriting from both Vickers and Margie Peters. Peters, who handles most of the bass for the Vestapolitans in addition to contributing fiddle and vocals, wrote one and co-wrote a pair with Vickers, all with an old-timey ragtime feel thanks in no small part to Jim Davis’ clarinet. They include the bouncy and cheery “Glad Rags,” a winsome “In My Dream,” and the outright goofiness of ‘Skeeter Song.”

Vickers contributes a handful on his own, from the Chuck Berry-flavored title track to the easy-going swing of “Because I Love You That Way.” A fine horn section (Davis on tenor with Matt Cowan on baritone sax) powers rollicking fare like “Without Moolah,” “Uh Oh,” and the jumping “Fourteen Women,” and Vickers’ guitar sounds downright dangerous on “Rockabilly Rumble,” the surfy-sounding instrumental that ends the party.

The originals are all top-notch – the sound is vintage but uncannily authentic. There’s nothing contrived or formulaic about the compositions - each sounds like a lost gem from the respective era rather than an attempt to capture it. Covers are well chosen as well, including a stringband-sounding “Digging My Potatoes” a raucous New Orleans-influenced take on J. B. Lenoir’s “Low Down Dirty Shame,” and a languid “How Long Blues,” the Leroy Carr classic. Imaginative arrangements show just how strong the songs themselves are while injecting new life and a unique perspective into each tune.

Touching on virtually every branch of the tangled web of roots that is ‘Americana,’ Vickers and company manage to create something new and fresh and vital that nonetheless sounds as though it’s been a part of the musical fabric for a long time. Wonderful stuff!