Buddy Guy - Live At Legends: The Legend Tears It Up On His Home Turf 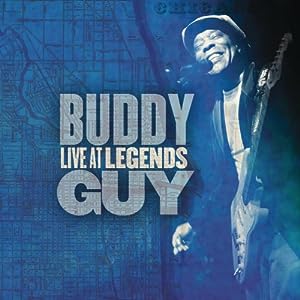 Blues and Rock & Roll Hall of Famer Buddy Guy released Live At Legends at the end of last year. In addition to being a musical icon, Guy has run his Legends club in Chicago for decades now and he presents seven songs performed on his home turf in this new package in addition to three new studio cuts.

It's a jarring transition from the ribald medley of Muddy Waters' "I Just Want To Make Love To You" and Bobby Rush's "Chicken Head" to Guy's own "Skin Deep," a pleading ballad for racial harmony and human kindness filled with stories from his days in Jim Crow-era Louisiana. Both performances are excellent and it's not to say there's no place on a blues stage for odes to libidinous thoughts and social consciousness, but it's an abrupt change here.

He has recorded innumerable classic sides throughout his career but "Damn Right, I've Got The Blues," the title track from the 1991 album widely considered his comeback record, has become something of a theme song for Guy and is a staple of his shows. It's a hard rocking slab of blues and he tears it up every time he tears into it and it's often a number where he brings out some of his trademark showmanship and humor. He does that here… for a moment; "Damn Right" is otherwise played serious,

straight, and hard by he and his band. The clowning around is saved for other songs like the aforementioned Waters/Rush medley and the opening track "Best Damn Fool."

Guy has another medley for his audience, giving a quick dose of John Lee Hooker's "Boom Boom," the song that inspired Guy to learn guitar and set him on his path according to his recent autobiography, and Cream's "Strange Blues." Guy and Clapton have become close friends over the years and Guy is seen by many as a bridge between and profound influence on the early blues and British Invasion guitarists that revolutionized rock and roll. Guy takes it a step further and blows up on Jimi Hendrix's "Voodoo Chile (Slight Return)."

The studio cuts are solid and could easily have fit on his most recent studio effort Living Proof and could have formed a solid core of new songs for a new studio album but don't feel essential. "Polka Dot Love" likely draws some inspiration from Guy's trademark polka dot Fender Stratocaster and was co-written by his longtime, Grammy-winning producer Tom Hambridge. Hambridge co-wrote "Coming For You" with the great Delbert McClinton and Gary Nicholson while "Country Boy" is an oft-covered Muddy Waters song.

Blues purists are going to howl and bitch that Guy has crosses over into rock and roll as much as he does here just as in the past but this seems to be the musical vision Guy always had for himself. He understands and loves the blues greats who came before and taught him as well as the contemporaries who played alongside him but he never had any intention in restraining himself or his sound. As he says at one point during the show, "I'm likely to play any damn thing tonight." That's Guy. A bluesman in command of his ability and so comfortable in his own skin and on his own stage that he takes flight and follows his fancy. Let the purists kick rocks; this might not be pure blues but it is pure Buddy Guy and that's just as rewarding as ever.