Corey Lueck has a voice that seems custom-made for the blues –a bit gritty, a lot raspy, with just a hint of sweetness around the edges to make it all palatable. It Ain’t Easy finds Corey stepping up front as leader of the Smoke Wagon Blues Band for the first time. (Together since 1997, the band has four previous recordings under its collective belt, the first three released independently). 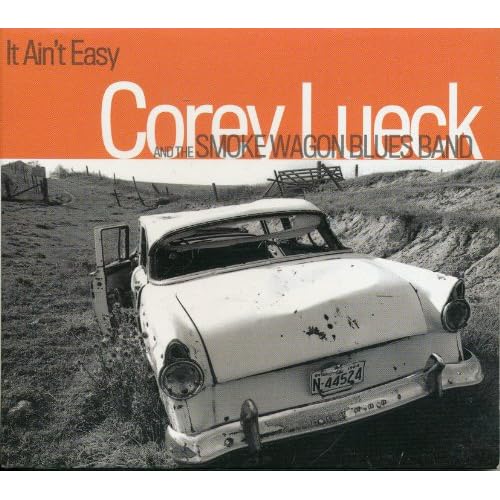 It makes sense, given it’s largely Lueck’s voice and distinctive harmonica that defines the band’s sound, and he has co-writing credits (most with guitarist Mike Stubbs) on all but the disc’s lone cover. Theirs is a tough, no nonsense, blue-collar bar band sound, but superior songwriting and finely nuanced performances – themes may be straightforward but the playing is thoughtful and carefully considered – render this a fine outing indeed.

Material tends to cover pretty basic territory – representative titles include “Devil Got My Woman,” “Drinking Hard And Steady,” “Fine Furred Mama,” and “Drink By The Sink” – and deal with the everyday concerns of everyday people. But while there are indeed a handful of shuffles, the arrangements tend to be sturdily crafted without sacrificing raw feel, and there’s enough variety and surprises to keep things interesting. Lueck’s squalling harp is judiciously applied for maximum effect, and guitarist Stubbs is equally adept at supple rhythm accompaniment and tight, economical leads that actually do lead somewhere.

The core band consists of bassist Gordon Aeichele, who also doubles on growly sax, and drummer Steve Sherman, with various friends and acquaintances sitting for relief now and then. There are even strings, applied with admirable restraint, on a pair of ballads (including the title track) courtesy of the Kingston St. Quartet, who also provide horns on a handful. Robin Banks shares lead vocals on the shimmery, swampy “That Voodoo” and handles the hard-driving “Where Did I Go Wrong” on her own.

But again, it’s Lueck out front now, and while he’s by no means a polished vocalist, there’s an innate honesty in every line he delivers. Most bands compose songs, practice, and subsequently perform them – by definition, there’s a certain artistic artifice involved. Lueck seems to bypass performing, sounding instead as though he’s literally living every song, every line, in the moment. (The title song is utterly heart-wrenching, the anguished cry of a man facing the sheer devastation of a lost love). Lueck’s harp work has the same quality – there may be better technicians around, but few can make the humble harmonica so expressive and so eloquent, and in the end that’s what matters.

It’s all honest and unpretentious, music made not for fame or fortune (though one assumes they’d both be welcome byproducts,) but for love, the kind made by people who simply couldn’t imagine a life that didn’t involve making music. It’s very real, and it’s very good.