David Gogo – Christmas With The Blues 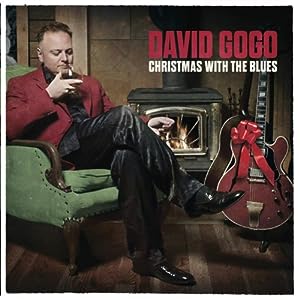 Canada’s David Gogo – he’s from Vancouver Island, one of the more isolated (and least urban) of the vast nation’s urban areas – is primarily known as a prodigiously talented blues rocker.

This being a collection that celebrates a time of good cheer – or not, given this is, after all, Christmas With The Blues – Gogo here eschews his usual aggressive attack for a lean, clean take on some holiday surprises, with a handful of originals to help make his Christmas parcel distinct from the rest.

That’s not to say Gogo’s lost his bite – there’s still a snarling ferocity to most of his solos. But those solos are generally short and sweet, and Gogo’s tone is as sharp as the air on a cold winter’s night.

Opener “Christmas Blues” sets the pace – a straightforward twelve-bar exercise with a nice biting solo – remove the lyrical reference to Christmas and this track would be a highlight at any time of the year. Gogo’s own “Christmas On The Bayou” is appropriately moody and swampy, with squalling, atmospheric harmonica courtesy of up-and-comer Shawn Hall. It’s probably not destined to become a seasonal standard but it’s a cool tune. Freddie King’s “Christmas Tears” is a flat-out belly rubber, again holiday-themed only by virtue of the lyrics – otherwise, it’s just a fine twelve-bar blues with exquisitely tasteful guitar work and sparkling piano from veteran David Vest.

Gogo’s second contribution is obviously heartfelt – raised on a tree farm, a song called “Let’s Get A Real Tree” seems perfectly natural. A Chuck Berry-style rocker, it works quite well beyond the slightly corny spoken-word intro. The pace slows down with a comparatively gentle, fireside version of Charles Brown’s immortal “Please Come Home For Christmas,” with Phil Dwyer’s creamy sax the dominant instrument. (Dwyer also contributes piano on this particular track). There’s a one-two punch with back-to-back versions of “Santa Claus Is Back In Town” and “Merry Christmas Baby,” both tough, no-nonsense guitar workouts , the latter enlivened by a fine horn section. Gogo’s instrumental take on perennial favorite “Little Drummer Boy” features Hall once more on harmonica, and again there’s a swampy, mysterious feel to the track, with Gogo’s shimmery guitar adding an enigmatic edge to give the track an entirely unexpected feel. Things wrap up with Mack Rice’s funky “Santa Claus Wants Some Lovin’,” an upbeat romp that should start a few yuletide fires of one sort or another.

Gogo sings well throughout, though his guitar is arguably the more eloquent, and the band is top-notch – there’s some great horn work, and pianist Vest (who’s worked with the likes of Big Joe Turner and Jimmy ‘T99’ Nelson) is a revelation.

All in all a wonderful antidote to the saccharine sweetness of most holiday offerings, this is a fine collection that, lyrics aside, would hold up well at any time of the year. Excellent stuff!