Standards, yes, but not the tired same-old-same-old batch … 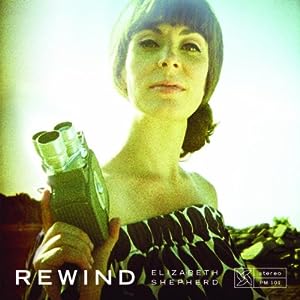 Shepherd refers to this as a pre-motherhood (recorded while Shepherd was pregnant with her first child) ‘standards’ disc, but this is no lazy stroll through the Great American Songbook.

True, the collection kicks off with Cole Porter’s “Love For Sale,” hardly an under-recorded ditty. But Shepherd also includes Georges Brassens’ “Les Amoureux Des Banc Publics” and the Gershwin’s seldom-heard “Buzzard Song,” a tune that George himself often excised from “Porgy And Bess.”

It’s an intriguing playlist – also on hand are a lovely voice-and-guitar “Poinciana,” Cannonball Adderly’s “Sack Of Woe,” and Kurt Weill’s devastating “Lonely House,” none of them exactly overdone these days.

Known to date as much for her songwriting as her singing, Shepherd here shows an equally sure hand at arranging, with subtle twists and unusual soundscapes on virtually every tune to keep things endlessly interesting. There’s the bowed bass and ‘tuned mixing bowl and muted pestle’ (courtesy of Shepherd herself) that cushions the aforementioned “Buzzard Song,” and the beatbox on “Prelude To A Kiss” (a duet with fellow Canadian Denzel Sinclaire). The Weill tune is given a ghostly air thanks in large part to Ross Macintyre’s plucked bass (he’s absolutely brilliant on every track he contributes too) and Shepherd’s ethereal, echoey vocals. Shepherd’s partner, Johan Hultqvist (also credited with art direction) provides ‘stereophonic snaps’ on a pair.

For the most part it’s all sparse and subtle, though a somewhat drum-heavy “Feeling Good,” breaking into a flat-out swing section in the middle, threatens to overwhelm both Shepherd’s vocal and equally delicate Rhodes piano, and “Midnight Sun” adds a bit of heat with an upbeat arrangement and some sparkling piano from Shepherd.

Shepherd’s voice is a remarkably clear instrument, best when it’s given lots of room. It’s strong enough, but there’s a gossamer lightness to her delivery, and she navigates that tricky territory between ‘cool’ and ‘warm’ with aplomb. She’s cerebral yet likeable, intellectual yet playful, inventive yet engaging.

In the end it’s quite beguiling … Rewind is a constantly surprising delight. Recommended!