A quietly unassuming celebration of Americana

Some of the greatest champions of ‘Americana’ aren’t American at all; Dutch guitarist/singer/songwriter Hans Theessink has spent his entire career – some 40-odd years on the road, with more than twenty recordings – celebrating American roots music. On Delta Time, he teams up with Terry Evans, a deep soul/blues singer best known for his work with Ry Cooder, for an immaculately performed, if a little sleepy, set of blues, soul, and gospel gems. 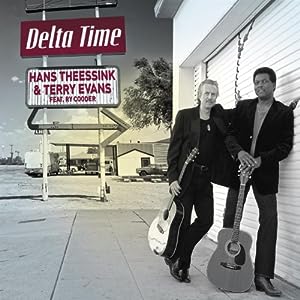 With a handful of originals fitting seamlessly into a playlist that includes The Delmore Brothers’ “Blues Stay Away From Me,” Jimmy Reed’s “Honest I Do,” and the soul chestnut “Pouring Water On A Drowning Man,” Theessink and Evans navigate their way down an American river of song, with the ultimate destination the Mississippi Delta. In addition to the celebration of the Delta life in the title track, there’s Theessink’s own “Mississippi” and J.B. Lenoir’s “Down In Mississippi,” a haunting and harrowing nuts-and-bolts recollection of growing up black and poor in the American south.

There’s gospel of a fire and brimstone sort on the traditional “Heaven’s Airplane,” and while there’s nothing overtly religious about either “Build Myself A Home” or “Shelter From The Storm,” both written by Theessink, they both have a spiritual and uplifting air.

The biggest surprise of all, though, is a cover of “The Birds And The Bees.” Says Theessink, “Terry sang on the original recording some 50 years ago and earned his first real money …”. It doesn’t sound at all out of place thanks to a consistent sonic palette – Theessink employed a variety of acoustic guitars as well as mandolin and banjo during the sessions, but the tonal variances are subtle, and Evans’ own rhythm, an electric guitar played through a Roland Chorus amp, doesn’t vary much in sound. Ry Cooder adds spare, ethereal slide on a trio, and Evans joins friends Arnold McCuller and Willie Greene Jr. in providing background vocals, but their contributions, too, are generally understated and discreet.

The sparse instrumentation creates an airy cushion of sound, often more dreamy than driving, but it’s well suited to Theessink’s laconic (extremely laconic) baritone. His singing is frequently little more than melodic muttering, but his limited voice blends superbly with Evans’, easily the more supple and agile of the two vocalists, and the tunes are carefully arranged to play to each singer’s strengths.

Ultimately this is the sound of two masters, one a guitarist of extraordinary ability and limited vocal range, the other a sublime singer with rudimentary guitar skills, tackling beloved material with a relaxed, assured approach. It’s definitely not an energetic affair, and there aren’t many moments of genuine excitement. But in its own quiet, unassuming way, this one’s a bit of a masterpiece.