When listening to solo music, one of my favorites is flamenco guitar, as played by a master. A marvelous example of this is the new ECM release by José Luis Montón, titled Solo Guitarra. The album grew out of sessions for another ECM recording, Arco 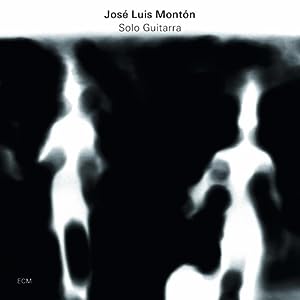 Iris by Amina Alaoui. When Manfred Eicher heard Monton’s playing, it was obvious that the guitarist was ready for a solo turn. Exactly one year after the Alaoui sessions, Monton returned to the Auditorium RSI Lugano in Switzerland, with Eicher in the producer’s chair, to record Solo Guitarra.

The 13 pieces that make up Solo Guitarra make a magnificent introduction for those who have never really heard flamenco before. The format is Spanish in origin, dating back at least to the mid-eighteenth century. Unfortunately for fans of the music, there has been a tendency in Hollywood to paint a very unflattering caricature of the “hot-blooded” flamenco guitarist. I actually find it kind of offensive, what with the Don Juan imagery, or even that of Charo. These portrayals have certainly not added anything to the general knowledge of the style, let alone its rich history.

José Luis Montón is certainly no Hollywood stereotype, and has been playing this music all of his life. He was born in Barcelona, in 1962, and made his concert debut there in 1989. He has recorded a number of albums since then, but Solo Guitarra is his first for ECM. The combination of artist and label is perfect. I believe that one of the reasons ECM has survived the gutting of the music industry is because of the unflinching vision of its owner, Manfred Eicher. His willingness to push the boundaries makes ECM the ideal label for Monton, as the guitarist is also not one to be put into a stylistic “box” when it comes to his music.

An excellent case in point is “Air,” which is based on Bach’s “Air.” The 3:30 piece combines the rapid arpeggios of flamenco, with the open and warm melodic sounds that Bach infused his composition with. It is an elegant stylistic blend, and one that displays just how wide-ranging Monton’s talent is.

The classical influence is present throughout the album, but generally in a way that is less obvious than that of “Air.” What Monton has done is to incorporate classical motifs into his playing and composition, which makes it more a part of his overall musical DNA than anything else. There is plenty of “true” flamenco on the album as well though, beginning with the opening track, “Rota.”

Flamenco music has two very strong characteristics. One is a very strong, somewhat aggressive melodic approach, with the other being the beautiful arpeggios which serve to flourish the music. It is not hard to see where the clichéd Hollywood portraits of these musicians came from, for this is very emotional music.

Monton incorporates these elements very well throughout the album, and some of his compositions favor one approach over the other. I would put “Rota” in the former category. The grand (and quite stunning) gestures outweigh those of the powerful and somewhat adamant melodies that follow. There is an aggressive quality to “Altolaguirre,” and “Al oido” which demands the listener’s attention, but the light touch is never far away either.

As we move through the album, I found the placement of a composition titled “Conclusion” as the eighth track to be intriguing. But this is just a title for a piece of music, not the concluding chapter of a story. The 5:49 song is a wonder, and one of the most successful examples of the various stylistic strains that run through Monton’s playing.

Although Solo Guitarra is not structured as a concept album, the final three tracks do work as a bit of a suite. These are “Tarareando,” “Piel suave,” and “Te he de querer mientras viva.” The overall effect after listening to this approximately 12:30 “mini-suite” is of a journey through many cultures, all culminating in the glorious finale “Te he de querer mientras viva.”

I imagine it was a no-brainer for Mr. Eicher to see that Monton was ready for a solo album. As he writes in the liner notes; “As the title says, there is nothing but guitar.” Actually, there is quite a bit more than “just” the guitar here. There is the presence of a remarkable musician playing it, a man who brings a wide variety of influences into the proceedings, and has created an album full of surprises. I believe that fans of flamenco will find a great deal to enjoy in Solo Guitarra.