A little bit ragged and a whole lot righteous …! 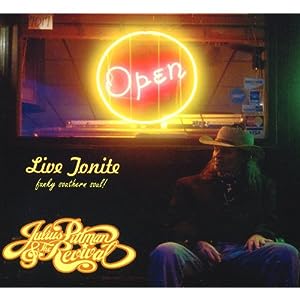 Like so many musical fads, the so-called ‘neo-soul’ revival seems to have receded once more from mainstream attention.  That doesn’t appear to faze Julius Pittman and his crackerjack crew – they play gloriously greasy and boldly brassy soul as though it’s never gone out of style.

Pittman, a monster on both piano and organ, is possessed of the perfect soul voice, raspy and rough and bursting with passion.  When he testifies – and testify is the right word, as there’s a genuine gospel fervor at work here – he leaves absolutely no doubt that he means every word.

Live Tonight, the band’s second recording, is subtitled Funky Southern Soul, and the description is apt indeed.  Anchored by Pittman’s piano and Hammond B3, the band features two guitars and a full three-piece horn section.  A handful of originals by Pittman fit perfectly in a playlist full of soulful gems that include “I Wouldn’t Treat A Dog,” Isaac Hayes and David Porter’s “You Got Me Hummin,” and the bluesy “A Good Fool Is Hard To Find.”  Things wrap up with an extended take on the Jr. Walker and The Allstars’ classic, “Shotgun,” that gives the horns a chance to strut their stuff.

It’s music designed to get a crowd up and moving, the kind that even those who don’t like to dance find it hard to resist - a big, rubbery bottom end and a hard-driving beat aimed straight at the feet, with Pittman whipping patrons into a frenzy with exuberant exhortations, supported by slinky guitar and  accented by punchy brass.

That sort of thing doesn’t always translate well onto disc, but Live Tonight captures the energy and exuberance exceedingly well.  The Revival is a large aggregation, but the recording, from a show at one of the band’s favorite haunts – is well balanced, and there’s a palpable sense that, while the players are all old pros, they’re playing music they love not because it’s a job but because there’s nothing else they’d rather be doing.

Performances are all top-notch, but it’s definitely Pittman’s show – the musical foundation is all-important, true, but in the end soul comes down to the voice, and Pittman is an absolute marvel.  His phrasing sounds perfectly natural and unforced, yet the sheer, driving urgency of his delivery is utterly undeniable.

Sure, they’re called The Revival.  And yes, the sound is retro by current standards.  But music this gloriously greasy, this ferociously funky, and this irresistibly exuberant will never really go out of style – not as long as there are dance floors to fill and people still have soul.  Wonderful stuff!