Jarrett's 1979 album has been issued on CD for the very first time.

In Keith Jarrett’s long and storied career, there has never been an album quite like Hymns/Spheres. The original double-LP was recorded in 1976 at the Benedictine Abbey in Ottobeuren, Germany. This is the home of the massive Karl Joseph Riepp "Trinity" Baroque pipe organ, with which Jarrett utilized to create this truly unique set of music. Although the album was recorded in 1976, and released in 1979, it has never been issued on compact disc before. In 2000, ECM released Spheres, which was a single CD containing excerpts from the set. The full 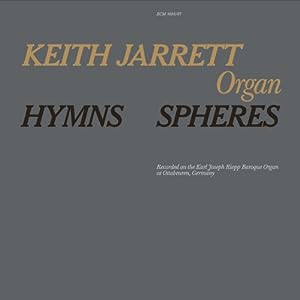 program is finally available as a double-CD, and it is one of the most unusual improvisational albums I have ever heard.

I imagine that this is the reason that it has taken so long for Hymns/Spheres to be issued on CD, but that is only a guess. There could be any number of factors. Last year the label released the live Sleeper, which had been in their vaults since it was recorded at a 1979 concert. That performance featured Jarrett’s fabled “European Quartet,” with Jan Garbarek, Jon Christensen, and Palle Danielson. I think most fans would agree with me that Sleeper was brilliant, with the pianist (all four actually) playing at the top of their game. So who knows why this one has remained in the vaults for so long.

Hearing a musician as talented as Jarrett playing the Trinity is an experience unlike any other. Think of the sound of the pipe organ as used in the score to The Phantom of the Opera, and imagine that transferred to an improvisational setting. Sort of. It is very difficult to describe this music, for I have never heard anything quite like it before.

The program begins with “Hymn of Remembrance” which is a suitably reverent-sounding introduction, and offers us a taste of the music to follow. After this subdued beginning, we are in for a tour de force of a performance. I had had no idea of what to expect, and Jarrett keeps things interesting for the duration of the performance. The high-camp qualities of the pipe organ are so great that they threaten to overtake the proceedings at some points though.

Jarrett never allows that to happen, but we do get a taste of his sense of humor. He may come off as incredibly serious, but if one listens to his improvisations, there is a lot of humor in them, especially in his musical quotes. It was certainly no accident he chose to quote from The Wizard of Oz during "Spheres (5th Movement)." The segment is not one of the classic songs such as “Somewhere Over the Rainbow” or “Follow the Yellow Brick Road.” What he tips his hat to is the incidental music we hear while Dorothy is being chased. It is a very clear, and easily spotted reference, and a fun moment.

That is the most blatant sign of the artist having a ball with the set and setting of Hymn/Spheres, but by no means the only one. Where he really indulges his bag of magic improvisational tricks is during the longer pieces. The first of these is "Spheres (2nd Movement).” Jarrett’s decision to take full advantage of all the bells and whistles of the Trinity pipe organ inform this 13-minute piece, and it is a tour de force.

There are nine “Spheres” movements in total. Each is a separate piece, and vary in length from the “Fifth” at 4:34, to the aforementioned “Second” at 12:59. Some references are made to what came before, but most of them are stand-alone, separate works. As mentioned, “Hymn of Remembrance” opens the proceedings, and the finale is “Hymn of Release.”

For Keith Jarrett fans, the release of Hymns/Spheres has been a long time coming. I cannot really think of an album by a major artist which has taken this long to be released on compact disc. Sure, there are recordings out there that have been held up for contractual reasons, or the tapes have been lost, and things of that nature. As far as I know though, Jarrett and ECM have a great relationship, so the long delay is just puzzling.

It may have to do with the nature of this set, because it is, well…very strange. Hymns/Spheres is certainly an anomaly in the Keith Jarrett catalog, and an album that might best be described as an “acquired taste.” I am very happy that it is now available though, as I imagine the many Keith Jarrett fans out there who have waited patiently for it are as well.