48 tracks from the Preservation Hall Jazz Band that document fifty years of fantastic music, while leaving open the possibility of great music for generations to come.

The HBO series Tremé began its third season this week. While the show has always treated viewers to an inside view of the world of New Orleans music - weaving in story lines about everything from zydeco to sissy-bounce – 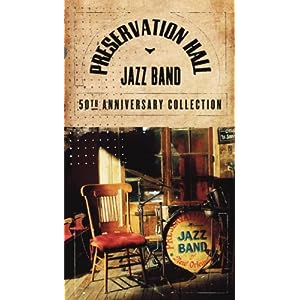 one style has been largely relegated to the background; traditional jazz. The occasional cameo by a local hero not withstanding, the major storylines in Tremé rarely revolve around the raucous ‘hot’ jazz that originally put the city on the musical map. Even trombonist Antoine Batiste (the most likely candidate for a ‘trad’ hit) spends the majority of his time chasing brass band and R&B gigs. For those looking for a deeper connection with traditional jazz, this week Sony Legacy is releasing The Preservation Hall 50th Anniversary Collection, a four CD collection that highlights the rich history and tremendous flexibility of this unique music.

Preservation Hall started with an idea: Take the informal jam sessions older musicians where holding at an art gallery off Bourbon Street and turn them into organized performances, preserving the music and showcasing the musicians. With this simple objective Alan Jaffe opened Preservation Hall in 1962. More than just another gig, the hall’s austere setting presented Traditional Jazz as art music, not just novel diversion or exotic ambiance for passing tourists.

Instead of taking listeners through the history of the hall chronologically, the 50th Anniversary Collection is a buffet of music, with classic tracks from founders right next to recently recorded material from today’s disciples.  Far from jarring, these juxtapositions create a sense of continuity. For example, when George Lewis’ version of “In the Sweet Bye and Bye” (recorded in 1962 by Nesuhi Ertegun and Cosimo Matassa) is followed by a 2010 recording of “I’ll Fly Away” with bluegrass pickers The Del McCoury Band, listeners are drawn into a discourse on the departed that spans decades. At the same time these two tracks illustrate how this music is not stagnant. Traditional jazz may be a fully realized musical style, but it is not rigid, and can find common ground across a number of traditions.

The collection features plenty of gems. There are five previously unreleased tracks salvaged from Allen Toussaint’s Sea-Saint Studio after Hurricane Katrina, including the version of “Precious Lord” sung by James “Sing” Miller that concludes the program. There is also a fantastic roster of guest artists: Tom Waits lends his gravely genius to the second line “Tootie Ma Is A Big Fine Thing”, Jim James (aided by an old vocal amplifier, dug up from the attic of the hall) presents a retro rendition of “Louisiana Fairy Tale”, and Pete Seeger fittingly leads the proceedings on “We Shall Overcome”. The most striking of these guest spots is a loose rendition of “Trouble In Mind” sung by Ritchie Havens. Recorded in two takes, the stripped-down track gushes with hope in the face of adversity.

As great as the collaborations are, the members of The Preservation Hall Jazz Band are the real stars of the show. The drummers present a wide array of grooves, from Cie Frazier’s rolling dirge on “St. James Infirmary” to Shannon Powell’s strident second line on “Little Liza Jane”. Singers like Anthony “Tuba Fats” Lacen and Percy Humphrey instantly connect with the listener. And there’s no shortage of great instrumental improvisations: George Lewis’ clarinet sings, Wendell Brunious’ trumpet struts, and generations of bands engage in the spontaneous, collective, polyphonic reverie unique to traditional jazz. The music and musicians prove to be so much more than commonly held stereotypes of ‘Dixieland’.

While four CDs (and the accompanying price tag) may scream “for connoisseurs only”, there is more than enough to make this a worthy investment for the casual fan. More importantly, the release serves to document fifty years of fantastic music while leaving open the possibility of great music for generations to come.