Quicksilver Messenger Service were one of the great bands of the Haight-Ashbury scene. Due to a variety of unfortunate incidents, they are all but forgotten these days, at least in comparison to bands such as The Grateful Dead, Santana, and Jefferson Airplane. I doubt that the recent Quicksilver Messenger Service: Anthology Box 1966-1970 will remedy the situation, but it sure is a cool set. 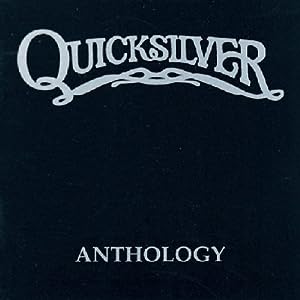 The Anthology is a three-CD, single-DVD collection, with a scarf and a badge, all housed in a very sturdy box. The packaging alone is worth noting, because once again, Cleopatra have done an outstanding job. Then again, you could put together a box as beautiful as this one and dedicate it to The Starland Vocal Band, and it would merit comment. Packaging aside though, it is the music that counts, and QSM definitely deliver the goods.

When it comes to sets of rarities, demos, and unreleased live material, there is something of an implied notion that the material has been “on the shelf” all these years because it is not very good. This is not at all the case with the QSM Anthology. There is a wealth of excellent music on this set, in fact most of it is far better than what has been released under their name since 1970.

The first CD is comprised of 11 outtakes, ten from their self-titled debut album, and the 11th being “Calvary” off the Happy Trails album. The first track is a version of “Dino’s Song,“ and it sets the tone for everything that follows. If there was a flubbed bass note or something like that buried in this take, I certainly cannot hear it. The song sounds fantastic. 15-seconds of “Studio Chat” seems a little irrelevant to include, but it is next. What really caught my attention though was “Gold and Silver.”

Here is where I must confess my ignorance of their debut album. Had I previously heard it, I would not have been so surprised at some of the outtakes. “Gold and Silver” incorporates the famous melody of The Dave Brubeck Quartet‘s “Take Five.” This really knocked me out, mainly because I had never seen any mention of this “nod of the hat” in any QSM articles I have read. Later on the disc comes an outtake of “I Hear You Knockin,” which has a great deal in common with the classic Screamin’ Jay Hawkins tune “I Put a Spell on You.” This is not meant to imply that QSM were “ripping off” other artists, but they had some very cool influences, and that is a fairly relevant point, which I had not seen discussed about them before.

The remaining two CDs contain live material from five different concerts, spanning the years 1966-1970. As befits a late-sixties San Francisco band, a great deal of the live material comes from shows at the Fillmore. Disc two features excerpts from two Fillmore concerts, one on May 11, 1966, and the second recorded on February 4, 1967. There are 11 songs from the ‘66 show, and eight from the ‘67 concert. The third CD of the set excerpts three concerts; four songs from The Fillmore East (1968): five songs from Winterland (1970); three songs from The Old Mill Tavern (1970).

As for the DVD, there are 15 songs, recorded at five different shows, beginning with Monterey Pop in 1967, and concluding with a 1973 performance at Winterland. Overall, the music is great, but the footage is not the best. The art of filming bands in performance was in its infancy, and it shows. But what are you gonna do? That is just the way it is.

The reasons that things changed in 1970 are kind of complicated, and not really worth going into here. Mainly it comes down to who actually owned the name Quicksilver Messenger Service, and what they chose to release under that moniker.

The liner notes from Dave Thompson spell it out nicely. I’m not going to quote directly from them, but he is on the money when he says that the “classic” QSM was ‘67-‘70. Sure, it helps to sell the product to make a statement like that, but in this case it is absolutely true. This Anthology made a believer out of me, and it is a must for any Quicksilver Messenger Service fan.