Despite the title, more soul than blues from McCormick 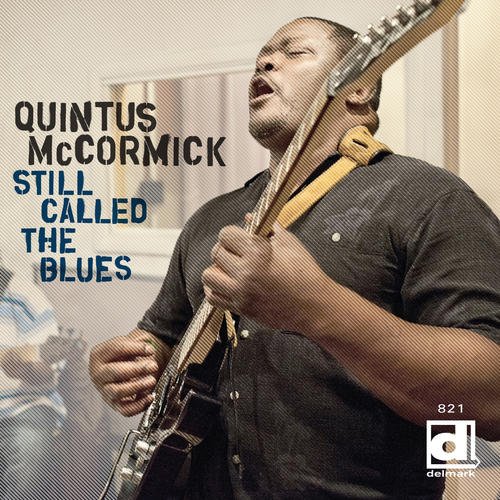 Chicago is known as a blues town, indeed often referred to as ‘the home of the blues.’ Yet there’s a vibrant ‘sub-strata’ of soul-blues artists with a definable sound that simply doesn’t get as much press. Quintus McCormick is based in Chicago, and while much of his material avoids twelve-bar cliché, he never strays too far from the blue end of the spectrum – it might be equal parts soul, but as the title has it, it’s Still Called The Blues.

McCormick’s third outing for venerable Delmark Records, this is a finely crafted collection with (mostly) strong material and fine performances, all in support of McCormick’s warm and inviting vocals.

Things don’t start out like a typical blues album. The leadoff track features burbling wah-wah clavinet and a slinky, funky groove. “What’s Good For The Goose” is a fairly conventional, but “What Am I Gonna Do” is strongly reminiscent of Tyrone Davis’ “Can I Change My Mind,” a deep soul classic. The title track, despite a slashing guitar solo, features busy drums and shimmery electric piano courtesy of Roosevelt Purifoy that give it a pop-soul feel, with the results a breezy stroll that’s likeable but not very bluesy. And we stray even further from the blues with featherweight “That’s My Baby,” featuring delicate flute and synthesized strings.

Any questions about McCormick’s blues prowess are laid to rest with “Everybody Knows About My Good Thing,” an extended belly-rubber (almost nine minutes) that gives McCormick lots of room to stretch out with some excellent soloing. “I’m In Love With You Baby,” one of only two tracks that feature horns, is a bit too cutesy and lyrically awkward, and “Always,” despite McCormick’s soulful delivery, drags a bit and isn’t helped much by the (again synthesized) strings.

Covers include cracks at “Oh Darling” and Bob Seger’s “Old Time Rock ‘n’ Roll.” The former is indeed the Beatles tune, here a low-key reading that highlights McClintock’s soulful pleading – a dull ache of longing rather than the searing burn of the Beatles’ version. McCormick sticks close to the original with his take on the Seger classic, though his soulful vocals seem to transform the song from a straightforward dance floor rave up to a more sensual, soulful song entirely – arguably, here, more a tune to listen to than dance to. There’s also a fine rendition of B.B. King’s “Woke Up This Morning” that shows the band more than capable of handling tricky time changes.

It’s all slightly slick, yet still gritty enough to feel real. There are weaker moments – a few of the compositions seem like album filler, and the band – particularly the rather busy drums from Pete Thomas – isn’t always as tightly locked as we’ve typically come to expect from studio recordings, though it does give the project a ‘working’ feel – real musicians playing in real time, rather than the sterility of overproduced and overly-perfect patchwork performances.

In the end, though, it all comes down to McCormick’s slightly gruff and deeply soulful voice. Every word he sings sounds honest and heartfelt, and there’s a singular sincerity in his delivery. His arrangements might be a bit fussy at times, and purists (either musical or audiophile) won’t care for the background strings – they tend to soften the edges of the songs that they’re on, and there’s a tinny quality that belies their computerized origin.

But given how many formulaic, by-the-numbers blues recordings are available these days, it’s a treat to hear someone honoring the tradition without being confined by it. Not an absolutely essential acquisition, perhaps, but a fine recording definitely worth checking out.