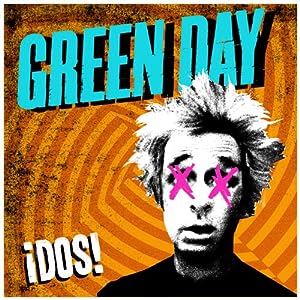 The tenth studio album for Green Day is ¡Dos!, the middle portion of a trilogy of records that began with ¡Uno! and will end with the upcoming ¡Tré!. While ¡Uno! set the tone with a collection of party pop-punk tunes, this record finds the trio a little more entrenched in the shindig to the point that the floor is beset with empty beer cans and cigarette butts and all the “cool people” have gone home.

That is, of course, a damn good thing. ¡Dos! plainly makes a lot of sense in what is shaping up to be one hell of a trilogy from Green Day. The “Kill the DJ” tones of the first entry have locked Billie Joe Armstrong (vocals, guitar), Mike Dirnt (bass, vocals) and Tré Cool (drums, percussion) in the garage.

Less punk and more rock and roll, ¡Dos! is at once wisely set apart from American Idiot and 21st Century Breakdown yet a step toward identification as an accomplished outfit. Green Day knows they have something more to prove with each record and the lean ¡Dos! is another strong statement of intent.

Clocking in at just less than 40 minutes, the album carries an immense melodic core and a lot of heart.

Many have (and will) take issue with Armstrong’s swing in terms of lyrical content. While some consider the absence of more overt political content to be a shame, ¡Dos!, like its cousin ¡Uno!, is actually still a dogmatic animal (“Baby Eyes”).

The “problem” is that Armstrong’s buried the lead, stumbling through avenues of suburban ennui, crumpled love and other subjects that still take root in fragmented times with fragmented plans. To suggest that the lyrics are decidedly “less important” by virtue of their human connection is horseshit.

After a brief minute of acoustic introduction, ¡Dos! gets the show on the road with “Fuck Time.” Commencing with a drumbeat that reminds of Neil Young’s “Fuckin’ Up,” Green Day kicks the song into gear with a little 50s swing by way of grunge rock. The dirty ditty even crosses the runaway centre line into surf rock while still maintaining its punk rock heart.

Elsewhere, “Stop Where the Red Lights Flash” kicks up a frantic storm while “Stray Heart” errs on the side of sweetness. The garage punk of “Ashley” is a blast from the past, with coursing guitar and spikey backing vocals from Dirnt.

Green Day closes ¡Dos! with the lovely “Amy,” an ode to the now-departed Amy Winehouse. Led by some beautiful guitar picking, Armstrong raises the emotional temperature: “Amy don’t you go/I want you around.” When he asks her if she wants to be his friend, it’s hard not to get chills. Armstrong’s lyrics are among his very best and his austere presentation suits the material stunningly.

¡Dos! happily fits right in the middle of Green Day’s ambitious but realistic trilogy. With notes of garage rock tossed in with the punk rock spasms, this is perhaps a more profound rung on the ladder. It has more meat on its bones and seems dirtier and grimier than ¡Uno!, creating an undoubtedly shaggy trip that is every bit of fun as its predecessor.