A welcome reissue that shows Loren has everything it takes ... 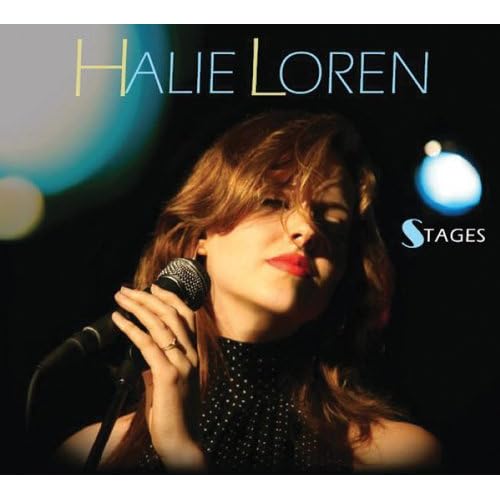 Aspiring jazz singers face a crowded field, and it’s hard to make an impression when so much of the standard material has been done to death. Halie Loren, still a relative youngster in a field that values artistic experience but doesn’t object to a bit of sex appeal, has everything it takes to be a major star.

Her most recent outing, 2012’s Heart First, was an intimate and engaging exploration of romance and love both won and lost. Stages, her only live recording to date, was recorded at two shows in 2009 and is here re-released by Montreal-based Justin Time records, with two additional tracks added this time out.

Loren started early and has won numerous awards as both songwriter and performer. She’s experienced enough to exude a cool confidence that allows her to stake her own claim on the classics, and ensures that the considerable risks she takes invariably work.

Those risks include a willingness to reinvent pop tunes in a jazzy vein – not uncommon these days as more and more vocalists seek fresh material outside the standard songbooks , and she’s talented enough to make them sound as though hers are the originals. Take, for example, the one-two punch of “Sunny Afternoon,” originally a slightly snarky hit for The Kinks, here a jaunty romp with an irresistible bounce, and an aching, bittersweet rendition of U2”’s “Still Haven’t Found What I’m Looking For” that captures the song’s yearning with poignancy rather than Bono’s bombast.

Elsewhere she brings a playful insouciance to chestnuts like “Is You Is Or Is You Ain’t My Baby,” delivers “Girl From Ipanema” (including Brazilian lyrics) with a perfect combination of cool observance and fiery but subdued passion, gets jazzy with some stretched-out improvisation on “Cry Me A River,” and treats “Summertime” like the lovely lullaby it is. The new tracks on this release include a wistful “I’d Rather Go Blind” and “The Nearness Of You,” the former recorded in Korea and the latter in Japan, and both fine performances that highlight Loren’s masterful vocal control.

Her own contributions – opener “Danger Of Loving You,” the joyously syncopated “More,” the tender yet clear-eyed “Free To Be Loved By Me,” and the lazily bluesy “They Oughta Write A Song,” all exhibit exemplary songcraft. Loren has a fine eye for detail and a winning way with words, and her melodies are memorable in a pop way without resorting to catchy but forgettable hooks. She’s equally adept at choosing material, from Patricia Andress’ sassy “High Heel Blues,” an accapella delight, to Melody Gardot’s moody and melancholic “Love Me Like A River.”

Loren is supported here by a superbly sympathetic band, including long-time foil Matt Treder on keys, with Mark Schneider on bass and Brian West on drums, with Tim McLaughlin adding occasional trumpet. Performances are impeccable, subtle and refined yet quietly exuberant. Most important, they swing at any tempo, breathing life into each tune and providing Loren with the lively platform she needs to wield her considerable charm.

Bursting with the sheer enthusiasm of capturing a groove and making musical magic, this is a welcome re-issue, a fine introduction if you haven’t yet had the pleasure and a significant addition to Loren’s discography that deserves wide distribution. Highly recommended!