As we recently discovered with the release of Keith Jarrett’s Sleeper album, there are some treasures locked away in the vaults of ECM Records. This should not really come as any big surprise, considering the fact that the label has been running under the benevolent rule of Manfred Eicher for over 40 years now. There have been no great shake-ups, or hurried profit-taking vault raids. But what did surprise me was the incredible quality of that concert. 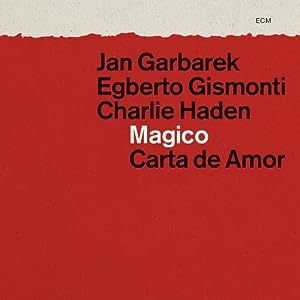 When something is put on the shelf for 30-some years, it is usually because the music is not quite up to par. Sleeper put an eloquent lie to that particular idea.

At the time of the release of Sleeper, ECM teased us that there would be another surprise coming this fall. That promise has been fulfilled with the release of Carta de Amor, from Magico, the trio comprised of Jan Garbarek (tenor and soprano saxophones), Egberto Gismonti (guitars, piano), and Charlie Haden (double-bass). The concert represented here occurred in April of 1981, at the Amerika Haus in Munich. All three of the musicians were at an artistic peak, as this concert shows. The 11 tracks are spread out over the course of two compact discs, and cover a wide variety of musical styles.

The show opens with Egberto Gismonti’s “Carta de Amor.” His guitar playing is beautiful, and the sound of Garbarek’s sax behind it is a highlight as well. Gisomonti composed five of the 11 pieces on the album, with the title track appearing at both the opening and closing of the set. I was particularly drawn to “Don Quixote,” where he trades his guitar for piano, and draws some gorgeous tones out of it.

Charlie Haden’s “La Pasionaria” is the second song, and at 16:26, is a tour de force. Although playing in Germany, the trio were all working with a very strong Spanish influence. The bass of Charlie Haden on this piece is unlike any I have heard before. Somehow, with bass strings which are as thick an elephant’s trunk, Charlie Haden makes them dance as if he is Segovia. It is an incredible achievement, and something I never thought possible.

Jan Garbarek’s first compositional credit comes with his arrangement of the traditional “Folk Song.” The Spanish elements are again on full display, and Gisomont’s guitar on this track truly shines. Garbarek’s “Spor” closes out the first disc. Up to this point the music has been very melodic, but with “Spor” the musicians hone in on a deeper, more aggressive sound. “Spor” finds the trio playing in a number of styles, none of which could remotely be mistaken for Spanish. There are times during the piece where I could not even identify which instrument was playing. Most of this occurrs during the mid-section, where they engage in some unique feedback experiments.

The second disc opens with “Branquinho,” another Gismonti track. The song features all three musicians in a very open environment, with each playing off the other nicely for 7:37. Of the 11 cuts on the set, I believe that Gismonti’s wonderfully inventive piano playing is best showcased on “Palhaco.” He composed the track, and it is almost a solo piano piece. Almost, but not quite. When Jan Garbarek’s saxophone comes in midway to take a solo, the two play almost telepathically. This is a marvelous duet spot, in a concert full of such tremendous moments.

“Palhaco” gives way to “Two Folk Songs,” which are arranged by Jan Garbarek. Charlie Haden’s bass opens, followed in quick succession by Egberto Gismonti’s guitar, and the saxophone of Jan Garbarek. It is a very ominous sound that the three initially achieve together, but this is quickly replaced by a wonderful Garbarek solo. His playing is excellent throughout the course of the night, but I believe it to be at its melodic best during this piece. The set closes with a second version of the title track, which is as lovely in its way as the first one was.

It seems that ECM have quite a number of concerts recorded at the Amerika Haus from the ‘70s and ‘80s. A couple of them have previously been released, most notably Ralph Towner’s Solo Concert (1979) and one of my favorite Art Ensemble of Chicago sets, Urban Bushmen (1980). Here’s hoping that Mr. Eicher and company decide to delve further into those tapes. If the shows are anywhere as good as Carta de Amor, there really is a pot of gold in those vaults.