Three years of waiting are over for fans of Somali-born rapper K’Naan. Given the abundant media attention from his visit to his former country, the critical acclaim for his last record Troubadour, and the projected hopes of those who adopted his song “Waving Flag” as an anthem for the African continent during the 2010 FIFA World Cup, the weight on his shoulders with the release of Country, God, or The Girl is substantial. Unfortunately, genius is notoriously fickle 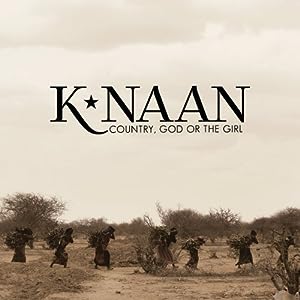 Fans of K’Naan will find plenty to like on this album. “70 Seconds” finds the artist in top form, deftly delivering lines like “We could have been special, if not for the many”, over a Regina Spektor-like track that eventually gives way to a rollicking African cross-rhythm punctuated by horns. The track “Gold In Timbuktu” highlights K’Naan’s ability to transcend the typical myopic, nihilism so common to rap, with him reminiscing as an old man over a hauntingly simple track. And on “Nothing to Lose”, K’Naan and Nas deliver verses so vicious they overshadow the unimaginative, saccharine-laced hook.

Unfortunately, the great moments don’t overshadow the general blandness of the album. It is not that K’Naan has suddenly “gone commercial”. Troubadour had a song with Adam Levine on it, but that track (“Bang Bang”) was clever, full of Pharcyde references, and a backing track that shifted and built throughout the song. The problem with the pop material on Country, God, or The Girl is that it is so utterly flat. One of the great things about K’Naan has always been his ability to bring depth to accessible music, but tracks like “Is Anybody Out There” or “Sound Of My Breaking Heart” leave listeners feeling like they just walked out of an overhyped movie.

It is hard not indulge in orange-slices-talk with this record – you know, the kind of “We lost but our defense is getting better and the kids are having fun” conversations parents engage in after youth soccer games, but there is a lot to be hopeful about on Country, God, or The Girl. K’Naan is still pushing himself lyrically and musically (dig the mbira on “Simple”) while retaining a feeling of accessibility. He has surrounded himself with people who know how to walk the narrow path of mass appeal and artistic integrity, like Nas, Bono and Keith Richards. Of course, Will.I.Am. produced one of the tracks, so who knows where this all ultimately leads. But given the greatness of his previous work and the unique perspective he is able to provide, I am satisfied to fast forward the forgettable songs on this record while I wait for the next truly brilliant K’Naan album.