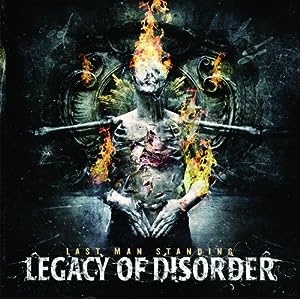 Taking more than a few pages from the books on thrash metal written by heavyweights like Pantera and Biohazard, New Zealand’s Legacy of Disorder materializes with the robust Last Man Standing.

The Pantera comparisons gain more ground when one realizes that Sterling Winfield serves as producer. He produced Pantera’s Reinventing the Steel as well as Damageplan’s 2004 debut New Found Power. With Legacy of Disorder, the results are similarly hostile.

That’s not to say that Last Man Standing is on par with the aforementioned or even deserves to stand in the same bloodied field, of course. Despite bursting at the seams with a fairly energetic approach, the resulting bombardment is nothing more than basic melodic power metal.

Vocalist James Robinson is fairly generic, displaying little range and capably shouting along to the beat with no efforts to contextualize. He doesn’t have melodic sense or vocal layers and his cadence is off at times. His counterpart, guitarist Rana Freilich, doesn’t fare much better. His fretwork is broad, his soloing is tedious and his grooveless chugga-chugga has been done to death.

The best that can be said for Legacy of Disorder’s record is that it sounds good loud, which is where that abovementioned heftiness comes into play. Given the right situation, these dudes would be well-suited to blow up a few amplifiers and stir the mosh pit before bigger, better bands came to play. Call them a reasonable but permanent opening act.

Even their most interesting moments venture into oatmeal terrain, like the tedious “March of Death” with its banal chorus and lack of depth. Despite showing an interest in history and framing it in the context of Germany’s invasion of Russia, there is very little to make the track memorable.

Vocal effects don’t save “Treading the Tainted Path” from its pre-2000s shrillness, even as it does stagger headfirst into a decent groove. And the rudimentary “Hell Tonight,” complete with rattling but predictable drum fills from Matt Thompson, adds little.

In the end, Last Man Standing is a forgettable and unexceptional melodic thrash record from a band that’s consigned to opening for better bands if nothing changes. That’s not to say that this isn’t a decent album or that the New Zealanders aren’t a decent band, but at this point “decent” appears to be the best they can do.