SMASH isn't quite a smash. 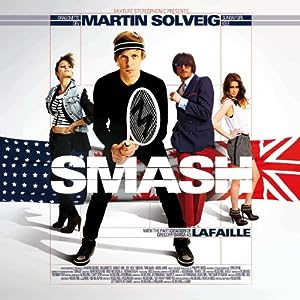 Martin Solveig’s SMASH has been available around the world and in download format for quite a while now, but the fifth record from the French DJ and producer is seeing its physical compact disc release in the United States on September 18.

SMASH has been fuelling sweaty dance floors since 2010 at least, when the single “Hello” featuring Canada’s electro-pop group Dragonette took to airwaves. The track’s video has over 60 million views on YouTube and landed in a gum commercial, the sure marker of success for modern dance music.

As dance music goes, Solveig’s brand is typical stuff. He doesn’t rely on many tricks and has a very pop sensibility, which works in club-ready doses but doesn’t really incite a deeper experience. While some electronic artists produce tapestries of sound, Solveig is more interested in the top layer.

Solveig, who worked with Madonna on her MDNA record, pairs up with Dragonette a total of four times on SMASH. “Hello” leads things off and is pleasing enough, but “Can’t Stop” is thin soup with its plain textures and old-school tang.

“Big In Japan” also draws Dragonette into the fray and brings the aptly-named Japanese female idol group Idoling!!! along. There’s little that differentiates the track from its competitors thus far, although things get better when Solveig starts to cover the pseudo-vocal effects and works them into the melody. The breaks are pretty neat too.

Solveig wisely ends on “Let’s Not Play Games,” a ballad that features Sunday Girl. The DJ/producer uses atmosphere wisely and steadily builds his production around the natural notes of Jade Williams’ voice. Her tones aren’t quite waiflike, grounded as she is in pursuit of the melody. The track is nothing earth-shattering, but it amounts to a nice enough three and a half minutes.

Solveig’s SMASH is a fizzy pick-me-up of an album. It packs very little novelty, lyrically or sonically, and seems little more than a vivid accumulation of genre tropes and electronica clichés. Solveig’s talent comes in binding the elements together into palatable pop tunes, ready for mass consumption and hopefully more feature spots in gum commercials.