Gets in and gets out, leaving no memories behind. 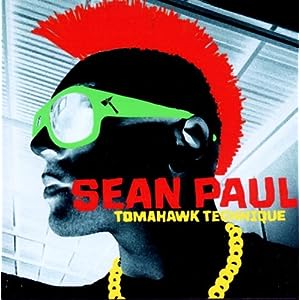 The fifth studio album from Jamaica’s Sean Paul is Tomahawk Technique. It adheres to the artist’s dancehall tradition, but branches out a bit more into mainstream pop music with traces of hip hop, electro-pop and R&B.

Paul, who won a Best Reggae Album Grammy for his 2004 album Dutty Rock, succeeds because of his cordial musical sense. Singles like “Gimme the Light” and “Temperature” brought the Kingston native attention on the global stage, while appearances with artists like Beyoncé and Blu Cantrell helped solidify his presence.

Paul is at his best when it brings his signature reggae style to the pop arena and works with other artists in service of creating a hit. It makes sense that Tomahawk Technique pushes this further, coming up with a radio-friendly set of safe club bangers that function well as earworms but don’t accomplish much else.

In service of this, Paul enlists A-list producers like Benny Blanco, StarGate and DJ Ammo to go with guest vocalists Kelly Rowland and Alexis Jordan.

“Got 2 Luv U” kicks things off with an intoxicating melody and dancehall chops. The StarGate-produced tune swells with synthesizers and Jordan’s enticing, winding vocals, creating a sexy and playful romp that’s been driving people to dance floors since its July 2011 release.

The Shellback and Benny Blanco production “She Doesn’t Mind” is a mid-tempo number that finds Paul hazarding his falsetto. Like the lion’s share of Tomahawk Technique, it’s an enjoyable but ultimately mediocre experience.

Sean Paul joins forces with Rowland for “How Deep is Your Love,” a synth-driven song with more StarGate production. It rests effortlessly in mid-tempo terrain and carries delicate Jamaican aroma, with Paul handling the verses and Rowland’s disgracefully over-produced voice bumping through the chorus and a call-and-response bridge.

Tomahawk Technique is an easy album to groove to, but there’s not much else to it. The songs are melodic and danceable, but the lyrics are plain and there’s little novelty to be found. It’s not a good album in the conventional, but it’s an innocuous piece of entertainment that gets in quickly and fades out just as fast.