Finally... a music documentary without a tragic ending 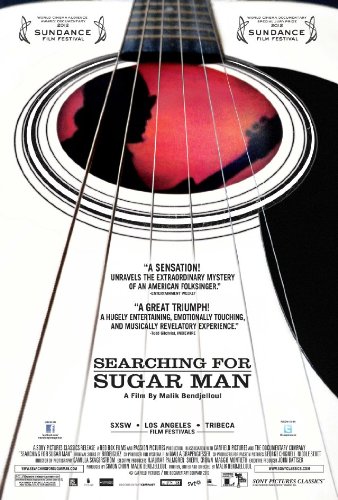 Most documentaries about forgotten musicians tend to be a bit tedious and overwrought as the subjects are not around or refuse to take part in the films. I should know - I have made two of them.

There are excellent films such as The Devil and Daniel Johnston and New York Doll (about the life of the New York Dolls bassist Arthur Kane), Nico/Icon and Grievous Angel, Gram Parson’s film bio, but these films are tragic looks into the lives and deaths of damaged people.

Malik Benjelloul’s Searching for Sugar Man is not one of those films.

It is one of the most positive, beautiful, and moving films I have seen in recent years in any genre. The film chronicles the twists and turns of two South African music lovers and their search for an eccentric, elusive artist known only as Rodriguez. He was long-rumored to be dead by his own hand, on stage and in front of an audience. They were just looking for information.

Rodriguez recorded two LPs in the early seventies that did absolutely nothing in sales so he quit the music business while making a third record. He moved back to his native Detroit in 1973 to work as a demolition and cleanup man in construction and raise a family.

Around the time of his second release, a young woman from the US visiting friends in Capetown brought both of Rodriguez’ LPs with her. When the friends heard the records, they begged her to leave them in South Africa and she did. The friends made cassette copies for many people and a tape made it to a radio station and, unbeknownst to Rodriguez, he was an instant superstar halfway around the world. It was not long before three different record companies wanted to sign Rodriguez but no one could find him – even his US record company had no idea how to locate him. Rumors abounded with two death scenarios but that did not stop bootlegged record sales which eventually sold over a half million copies. He sold more than Elvis or Bob Dylan in South Africa. Radio was extremely restricted during Apartied so government agents scratched the most political songs on the records so they could never be played on the radio for the masses.

I will not reveal the story as it continues; you need to see for yourself. I will say that the film, while about the artist and man, is about the shame of apartied and the repression that the government put on both blacks and whites. While the world shunned South Africa, its citizens had no idea because all news was censored. How Rodriguez’ music and message got through is a miracle. His songs, “I Wonder” and “Cold Fact” had such an impact on the people of South Africa that they actually started a movement.

The soundtrack to Searching for Sugar Man is available on Sony/Legacy and is the first time Rodriguez’ music has been available in the States in 40 years. Even if the film does not come to your town, I recommend getting the soundtrack. The music is ethereal and sometimes heart wrenching - but never tedious.