Bob Dylan warned us in "Mississippi" you can go back but you can't go back all the way and it's with that in mind I sat down to listen to the first album of new Soundgarden music since their 1996 effort Down On The Upside. 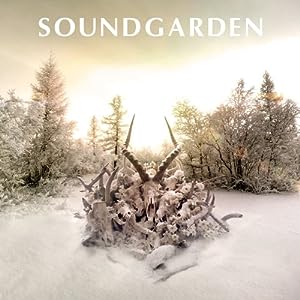 The Seattle quartet -- Chris Cornell, Kim Thayil, Ben Shepherd, Matt Cameron -- have pursued other musical endeavors in the years since (Cornell fronted Audioslave and made solo records, including a solo acoustic live album while Cameron has spent the last several years drumming with Pearl Jam) and have issued a smattering of recordings under the Soundgarden name. They released Live On I-5, taken from the Upside tour, a compliation, and a new song "Live To Rise" for The Avengers soundtrack.

The live album was nice to have, the band never having released a proper one during their first go 'round. "Live To Rise" was appallingly terrible and almost scared me enough to keep me from rolling the dice on King Animal (the title went a long way towards reinforcing that fear). In the end, I am what I am: Encyclopedia Nerdicus The FanBoy; of course I bought it, expectations low and hopes high.

The first words from Chris Cornell's mouth on the opening track "Been Away Too Long" reveal the banshee wail we kids of the '90s remember is in fine shape but has lost a little velocity in the upper register. It's difficult to resist the temptation to read something into opening a reunion album with a song called "Been Away Too Long." Has Soundgarden gone sappy on us? Is this their flowers and chocolate, asking us to welcome them back into our lives and onto our iPods? Maybe not... Those first words? "You can't go home/no I swear you never can" followed by a chorus dripping with ambivalence: "I only ever really wanted a break/I've been away for too long/Though I never really wanted to stay/I've been away for too long." Regardless the intention, it's a solid opening to the record and good reintroduction to the band.

"Black Saturday" opens with an acoustic figure -- not unprecedented but not common -- in the Soundgarden catalog that takes a few interesting turns along the way.

The highlight comes a few songs later when Kim Thayil captures the sound of his vintage, detuned riffing on "Blood On The Valley Floor." Younger Soundgarden may have taken a riff like this and bludegeoned it for six or seven minutes; this more mature band keeps it compact at under four minutes. Maybe that's better songcraft but I miss the longer jams and interplay between Thayil and drummer Matt Cameron.

That's the main difference between King Animal and the prior efforts from the band. These compositions are in the three or four minute range with very little exploring or experimentation and that's a shame.

Soundgarden at their best could be unwieldy and challenging with song structures employing odd (and often shifting) time signatures yet remained while accessible with their classic hard rock roots. Traces of that exist on King Animal but the riffs aren't as ambtious nor the hooks as memorable. Soundgarden avoids the trap of so many reunion albums; they don't sound a like a band self-consciously recreating their former sound or running from it. They've made a solid record with few memorable moments; the ingredients are here but the magic is missing.