Believe the hype: one of the year's best records...

I hadn't ever heard of Tame Impala or their 2012 album Lonerism until I saw it touted as among the best albums of the year on several prominent year-end lists. I don't know how I missed it and them until now but all the praise made me curious to see if it belonged on my own list. 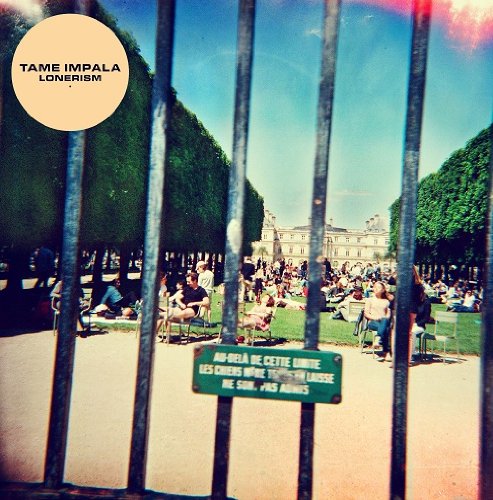 I've now spent a couple weeks with the record and I'm pleased to report it's almost as good as I hoped, almost living up to the hype surrounding it. It's impossible to discuss this album without dealing with the obvious so let's begin there before going any further: yes, Kevin Parker sounds as much like John Lennon as just about any vocalist we've ever heard and Lonerism does sound like what might have happened if Lennon and über-producer DangerMouse collaborated on a record; it sounds like someone made a John Lennon/Beatles mashup, remix record without using any of those legendary songs.

The psychedelia that sounded so cutting edge and far out in the '60s now sounds dated, sending many artists chasing ways to use advanced digital recording technology to refresh those sounds. The results have yielded mixed results sonically and musically, and that's true on Lonerism although everything works far more often than not. Parker muddies the sound and makes the record sound and feel simultaneously before, ahead, and of its time, marrying lo-fi sounds to the digital age, giving birth to something simultaneously modern and retro and all in the best sense for most of the album.

Songs are constructed to rely more heavily on ambiance and texture created by layering synthesizers, guitars, and computerized filtering and effects rather than melodies with verses and choruses. The freedom from convention allows for sublime moments of bliss at its best and mindless blasts of aimless sound that feel haphazardly placed, existing just for the sake of it rather than for any musical purpose. The album is at its best when sonic explorations are anchored to something substantial even if Parker isn't writing typical songs.

Parker's post-modern Beatles mashup has more than just the ghostly sound of John Lennon's voice. The sound of George Harrison's guitar circa Sgt. Pepper is prominently heard on "Keep On Lying" and "Mind Mischief." The former even borrows a hint of the harpsichord sound on hidden gem "Fixing A Hole" among its other synth voicings; both are highlights.

"Mind Mischief" gives that Harrison-esque guitar a little more snarl and bite as Parker's gauzy, double-tracked vocals float across them and a fuzzed bass line. The guitars drop out, giving way to a dreamy middle section built on layers of keyboards, before returning to the familiar opening sounds and then it changes again as it floats away into "Music To Walk Home By."

"Keep On Lying" has that Beatles feel but also an undercurrent of a soundtrack to one of those great spy movies from the '60s as well. It's as if Lennon, McCartney, and George Martin hobnobbed with Quincy Jones and Burt Bacharach while listening to Monty Norman's classic Bond theme and yet, with all those influences and reference points, this is a song all its own and one of magic.

Parker does more than (re)create Beatles soundscapes, as "Elephant" channels UK rockers Muse with an anthem set to a martial beat. "Why Won't They Talk To Me?" might be the closest thing to pop on the record but it shuns direct radio friendliness as does the sunny, diaphanous "Nothing That Has Happened So Far Has Been Anything We Could Control" and album opener "Be Above It."

Lonerism is a living, breathing record flowing with imagination, reminding us all once again a creative mind and the right tools can take us places we've never been or show us familiar faces in fresh ways. It's not the best record I heard in 2012 but it's among them and will send me off to investigate the prior Tame Impala output while I wait for its successor.