Before there was Atoms for Peace, Radiohead producer Nigel Godrich and percussionist Joey Waronker collaborated on Ultraísta... 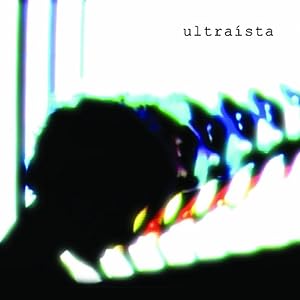 I learned of the self-titled debut from Ultraísta as a result of my excitement for the recently released debut from "supergroup" Atoms For Peace. Atoms consists of Radiohead frontman Thom Yorke, longtime Radiohead producer and collaborator Nigel Godrich, Red Hot Chili Peppers bassist Flea, drummer/producer Joey Waronker (Beck, R.E.M.), and Mauro Refosco. I don't know if Atoms For Peace spawned Ultraísta or the other way around but last year Godrich, Waronker, and Laura Bettinson released their self-titled debut under the Ultraísta moninker and I've been listening to it in anticipation of Atoms' Amok (an album we'll discuss in the coming days).

I'm not what you'd call an electronic music aficionado. I've sampled it but often found myself... nonplussed. So much of it was a throbbing, repetitive "...and one, and one, and one" bass line with little to no deviation in tempo or dynamic and no discernible melody. That makes it easy for a rhythmically challenged kid like me to follow- too easy, it turns out. I just couldn't find an appeal and I found myself more often interested in bands using electronic sounds as one component of their broader sound than artists specializing in the different fractals of electronica. Still, the names associated with Ultraísta and Atoms got me curious and I'm glad I stumbled upon them.

What sets Ultraísta apart from the small sample of electronica to which I've previously been exposed are the songs. They're not melodically adventurous or lyrically rich but they're more than test patterns for engineers in acoustic labs researching the latest in headphone and speaker technology. They wisely keep the record concise -- 10 songs in just under 40 minutes, none exceeding the five-minute mark -- establishing and creating diverse soundscapes without belaboring the point and without static bass blasts bludgeoning listeners into boredom.

Some tracks are dense and claustrophobic while others are spare, sparse, and pretty. Bettinson's vocal approach is disaffected without sounding disinterested and it is effective against these different textures. Her voice is often filtered and layered, occasionally running counter to the rhythms created by the digital beats. Her vocals are deployed in lush, warm layers as well as isolated, brittle shards. She can lull you into trance with repeated refrains as she does on "You're Out," "Easier," and "Wash It Over."

Grinding, distorted guitar effects give "Bad Insect" the feel of something Waronker might have played on with Beck while other songs -- "Easier" and "Wash It Over" -- have more in common with Kid A period Radiohead, relying heavily on synthesizers.

It will take a lot of coordination for the musicians associated with Ultraísta to come together for a second installment but the results of their initial collaboration are plenty strong enough to make it worth their while.